Wagyu around the World - Austria

13 farmers attended the first Austrian breeders meeting that was held by interested producers in August 2012. Speakers were Andreas and Benediktor Scheiring and Peter Beiler.

A number of meetings were held with members and stakeholders in the industry and association statutes were released in January 2013.

The Wagyu Verband Österreich represent the interests of Wagyu breeders in Austria. Anton Leitner, known as Toni, is Chair and has been involved with beef since childhood and is a passionate organic farmer. Deputy Chair is Florian Irxenmayr from South Austria and Patrick Fehringer is Treasurer.

Ex-professional cyclist Gerhard Zadrobileks is a renowned Wagyu breeder with “Kobe Beef Austria” in Laab im Walde near Vienna. He had a few Scottish Highland cattle but was given a breeding bull for his 30th birthday. However after tasting Wagyu for the first time in 2006 he wanted to breed them. He bought embryos and after an arduous journey his herd started to grow. They graze on lush pastures and receive some grain supplements. He has bred up to 18 head now. "Kobe Beef Austria" is served in discerning restaurants. Beef can be ordered online through "Wiesbauer Gourmet" but orders usually go straight to the backlog. 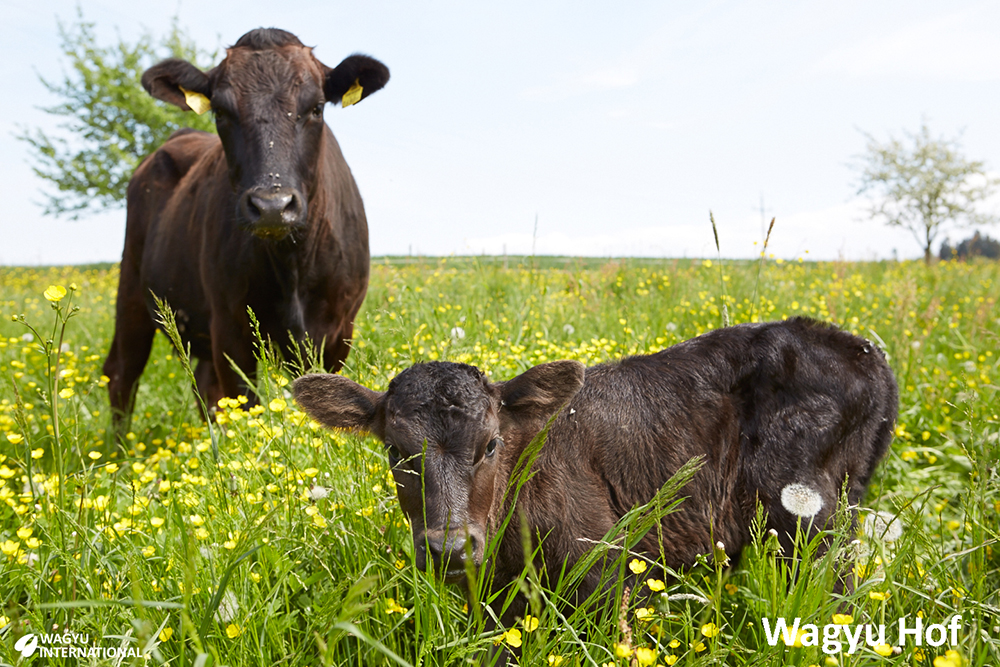 Wagyu Hof was created from a third-generation agricultural business when a young team comprising Florian Irxenmayr, Patrick Fehringer and Karl Peterseil was formed. They contacted Wagyuverband Austria who gave them valuable advice. After an eventful, very educational year, the first two bulls arrived from America. Wagyu females were imported from Germany and breeding commenced. The first slaughter was in 2013. At the beginning of 2017, the new free-range stable was then occupied by the herd that had grown extensively.

Peter Trixner produced his first Wagyu carcase from “Okami Wagyu” near Klagenfurt, Austria. Peter and his wife Petra own a beautiful ranch on a hillside with the Austrian Alps in the distance. They are raising Wagyu and Wagyu-Charolais crosses for the hotel’s restaurants that he has an interest in. The Lake's hotel located in nearby Portschach am Worthersee was featuring some of Peter's beef last summer.

Wagyu breeding is progressing in Austria and imports are from neighbouring Germany or frozen genetics from Australia and USA.

The Wagyu breeds have unique qualities that are attributed to origins from the Fourth Eurochs and they were isolated for almost the first two thousand years after arriving in Japan. This has enabled Wagyu to have retained key differences from other breeds while they are classified to be on the extreme within the Bos taurus pool.

Most Wagyu producers that introduced Wagyu cattle onto their cattle properties around the world had prior experience with other beef breeds or in milk production. Outside Japan, nutrition recommendations for Wagyu generally follow common practices that are applied within each country and there is a strong bias towards the principles that have evolved for the dairy industry. Most of the advances that have been made with genetics in Japan - such as the single step genomic predicted breeding values - have been adopted by progressive bodies outside Japan (such as Australian Breedplan). However, the philosophy that applies to fattening Wagyu in Japan has been more elusive.

Initially research data over 20 years from Japan was analysed and some preliminary principles were adopted by Wagyu International. Subsequently the translation of the Japanese Beef Feed Standard 2008 provided additional information.

Calves in Japan are typically sold to the fattening industry between 8 and 10 months of age depending on strain/prefecture.  Although there are differences of sex and strain of Black Wagyu, the weight for age at the calf markets is a useful indication of finishing potential. The traits related to yield tend to increase when there is a higher weight for age. The average is 1.0 kg per day of age from Hokkaido (Osawa et al. 2008). Individuals who exceeded this had invariably been overfed and meat quality was disadvantaged.

In order to minimise the impact on quality by the mandate to reduce age as implemented in 2015, research on feeding has taken on a different perspective. The numerous results have been reviewed by Wagyu International and any findings that have implications for either pasture or grain finishing of Wagyu in the global arena are applied. The effect of ADG and the time to reach the same end-point on marbling (IMF%) is illustrated below: 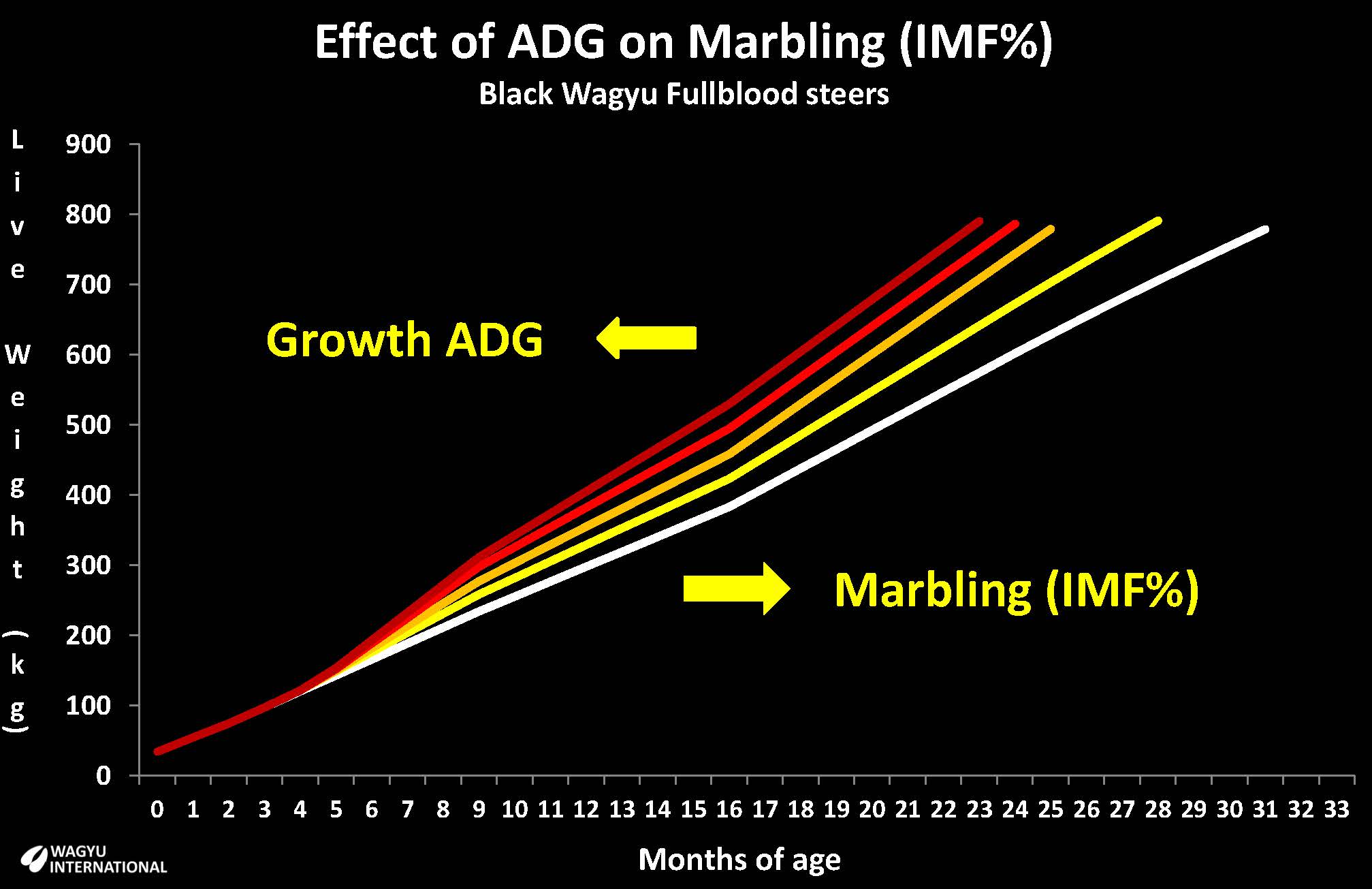 An increase in growth rate towards the left of the chart allows slaughter weight to be achieved at a younger age but this reduces IMF% in the lines that are darker in colour. The lighter coloured lines have higher marbling from lower growth rates.

The loss of energy in heat and methane during the conversion of starch and cellulose to VFA makes the process of fermentation inefficient. When acetate is produced in the rumen there is a loss of one carbon as CO2 which can be used to form methane. Butyrate is produced when two acetate molecules are combined so even though butyrate does not produce CO2 which can be converted into methane directly, the CO2 is produced when the acetate molecules were formed. Propionate is the only VFA that does not release an extra carbon that can be used for generation of methane. Because of these differences in carbon, the energy values for the VFA are highest for propionate, intermediate for butyrate, and lowest for acetate. Therefore, increasing propionate within the rumen will decrease methane production and increase animal performance for beef production.

The acetate:propionate ratio is important but there is a negative trend between NDF and IMF%. Research data from fattening trials in Japan have been reviewed by Wagyu International is continually monitoring progress in Japan and applying it through collaborations with producers in the northern and southern hemispheres. As always, the economics and end points are different in every enterprise.

Proceed to Global to select another Country