Wagyu around the World - USA

History of Wagyu exports from Japan

The Wagyu population outside Japan is derived from fewer than 200 exports to USA that arrived between 1993 and 1997 after the first arrivals in 1976.

Four bulls were sent from Japan by Morris Whitney in 1976. Colorado University took semen collections then they were bought by Wagyu Breeders Inc. There were no Wagyu females in America so the original two Wagyu Black (Mazda from Tottori and Mt Fuji from Hyogo) and two Wagyu Red bulls (Rueshaw and Judo from Kumamoto) were joined to Angus, Holstein, Hereford and Brangus cows in Texas. By 1991 the highest percentage Wagyu bull in the USA was 63/64 and it was estimated that there were less than 300 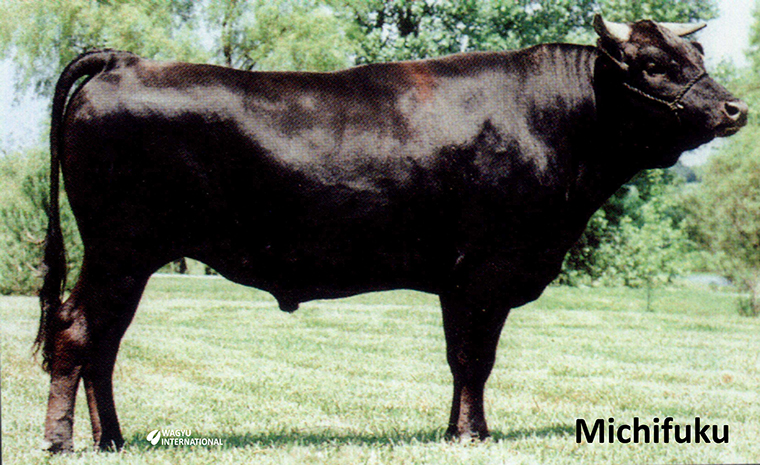 Wagyu crossbred females of breeding age that were 3/4 Wagyu or higher. In about 1991 the narrow genetic base was widened when semen from the fifth bull Itotani was brought to Canada by Lakeside Industries at Brooks. In the fourth generation, the American Purebred (15/16) is obtained and contains 93.75% Waggyu genetics.

The Mannett Group (later to become World Ks) imported four Black Wagyu females (Suzutani and Rikitani - both Tajima - and Okutani - 75% Tajima and 25% Shimane) and two bulls (Michifuku and Haruki) were flown in July 1993. The first Fullbloods to be born outside Japan were the second generation embryos sired by Haruki II. Rikihari in Canada was the first on 19th June 1994 from Rikitani, then Genjiro from Okutani on 23rd June, with Okuharu following on the next day. The first Fullblood calf to be born in USA was Fujiko with her brother Beijirou from Okutani, also on 24th June 1994. Later in the year the first live exports were transported from USA to Wally Rae in Australia.

In this consignment were Red Wagyu imported by Dr Al and Marie Wood from selections made by Mr Yikio Kurosawatsu and Dr King in Kumamoto Prefecture. Nine red females (Namiko, Ume, Namoi, Akiko, Haruko, Fuyuko, Dai 3 Namiaki, Dai 9 Koubai 73 and Dai 8 Marunami) and three red bulls (Shigemaru, Tamamaru and Hikari) are regiostered in the AWA but reports state that only seven heifers were imported of which three were pregnant on arrival in USA. Calves born to AI (from Japanese sires Namimaru and Dai 10 Mitsumaru) were Big Al, Kaedemaru, Momigimaru, Ringo, 504 and 505. After the 180 days incubation that was required for quarantine, Namoi, Dai 3 Namiaki, Kaedemaru and Momigimaru went to Ontario in Canada. The remainder of the Red Wagyu/Akaushi herd in USA was sold to Englewood Farm in Texas. Subsequently most were transferred to Heart Brand.

Mr Shogo Takeda exported 35 black females, many in calf, and five black bulls (Itomichi 1/2, Kikuhana, Itohana 2, Kinto and Terutani) in 1994. There are numerous females that have been registered with births during this period.

Chris Walker of Westholme imported 25 black females and three black males - Hirashigetayasu "001" (Kedaka), Itomoritaka "002" (Fujiyoshi) and Kitateruyasu Doi "003" (Tajima) to USA from ET Japan Company in Hokkaidoo in 1997. The following year another 59 females arrived together with semen from three black bulls (Shigefuku, Dai 6 Seizan and Kitatsurukiku Doi). 63 of the heifers in the two consignments were pregnant when they left Japan. The bulls had semen drawn and were slaughtered after the outbreak of BSE in Japan but the females were exported to Australia. This consignment was diverse with 44 Shimane and 28 Kedaka with 12 Tajima so injected milk and size with marbling. Dams which bred in Australia include: Hatsuko, Itoreiko, Kazuaki, Kitahikari 97/1, Kitakazu, Kitaokumi, Kitasakaedoi, Kitasekitori, Kitatizuru 2, Kunikiku 96, Masako, Masatoshi 2, Sakaehikari, Sekinakada 22, Sekiyuhou, Takakuni, Takashigedoi, Yamafuji, Yamaketakafuji 3 and Yuriyuhoi.

A Mishima bull (Kamui) - a native cattle breed from Mishima Island - was in this consignment. The indigenous cattle population on Mishima Island had been eliminated by Rinderpest disease in 1672. A few Japanese Black were transported over from mainland Japan to re-establish the herd, which has been in-bred for more than 25 generations. This genetic pool represents the traditional draught cattle of the 1700s so is distinct from Japanese Wagyu breeds of today. Mishima has high marbling but is smaller than Wagyu. Accordingly, "Kamui" (whose semen was imported by Takeda) was registered as a "base" animal (B115 with date of birth 28th August, 1991). Kamui progeny out of registered Fullblood dams are registered as Wagyu percentage (50% Wagyu) by the American Wagyu Association.

The Takeda herd in USA was subsequently sold to Mr Gary Yamamoto in Canada.

In summary, the names of bulls, heifers, semen and calves that were imported or born from Japanese parents are tabled:

The Wagyu herd in USA.

There are 40,000 Wagyu (including crosses) on feed presently in USA. Another 150,000 head are marketed from South America so they all are absorbed into the market. The Wagyu industry is enjoying strong growth of 20% presently in USA. The upgraded Purebred Wagyu constitutes the bulk of the herd whilst the numbers of 100% fullblood Wagyu are also increasing.

The proportion of grades within each year's registrations shows trends over time. The predominance of the crossbred (yellow) progeny as the basis for the American purebreds (red) during the breeding up of Wagyu in USA is illustrated. Purebred Wagyu do not require DNA parent verification since 2000. The calf crop of 1998 was the first year in which fullblood (blue) registrations exceeded purebreds, then it slipped to 30% in 2005 but has been climbing again since then. Purebreds have generally accounted for one quarter of all registrations throughout (from American Wagyu Association website):

Black Wagyu registrations ranged from 94 to 96% of full registrations by the American Wagyu Association annually over the past ten years and they are descendants of Japanese Black.

Several Mishima descendants from crossing with Wagyu are registered in the Recorded and Percentage sections of the herdbook.

The red coloured Wagyu are called Japanese Brown or Akaushi in Japan. Japanese Brown is the name used by the Japanese in scientific literature. The two Japanese Brown bulls that were imported to USA in 1976, two heifers brought in by Japanese Venture Partners, and the batch of 10 males and females that arrived in 1994 are the sum total of Japanese Brown live exports that left Japan. The American Wagyu Association called the Japanese Brown breed Red Wagyu in their herdbook. Some reds went to Canada after a quarantine period.

The first Red Wagyu were registered under the name Englewood in USA. After breeding up from the original two bulls in 1976, the first purebreds were registered with the 1992 calf crop. From the 1995 crop the Red Wagyu purebreds were registered under the Heart Brand name. In 1994 the twelve live Japanese Brown imports arrived from Japan and they formed the base of the fullbloods. It is claimed that another two females were exported from Japan but they were not part of the JVP or Englewood consignments. Shipping documents have been offered but they have not been sighted yet.

This table shows the foundation Red Wagyu/Akaushi that were imported from Japan, or calves that were born from artificial insemination:

Wagyu are spread widely through USA. Nearly 100 members of the American Wagyu Association are in Texas.

In the fall of 1991, the inaugural meeting of the Canadian Wagyu Association took place in Calgary. It took two years of intensive lobbying before the Association was incorporated. There were 32 members in 1993 and 54 in 1994. 84 registrations had been processed by 1994. Canadian breeders use the eservices of the American Wagyu Association.

The American Akaushi Association has been active for a number of years. Registrations are not viewable by the public but it is claimed that there are about 7,000 active Red Wagyu fullblood females in the association. Bubba Bain has been heading the association since 2009. There are 14,000 fullbloods and crosses in the HeartBrand program.

Grading of beef in USA

90% of Wagyu slaughtered in USA is classed Prime, which is the highest and marbling is described as 'Slightly abundant to Abundant' and has a minimum intramuscular fat content of 8 - 11%. Choice has 'Small to Moderate' marbling while Select has 'Slight' marbling. USA Marbling chips 1988 are displayed. 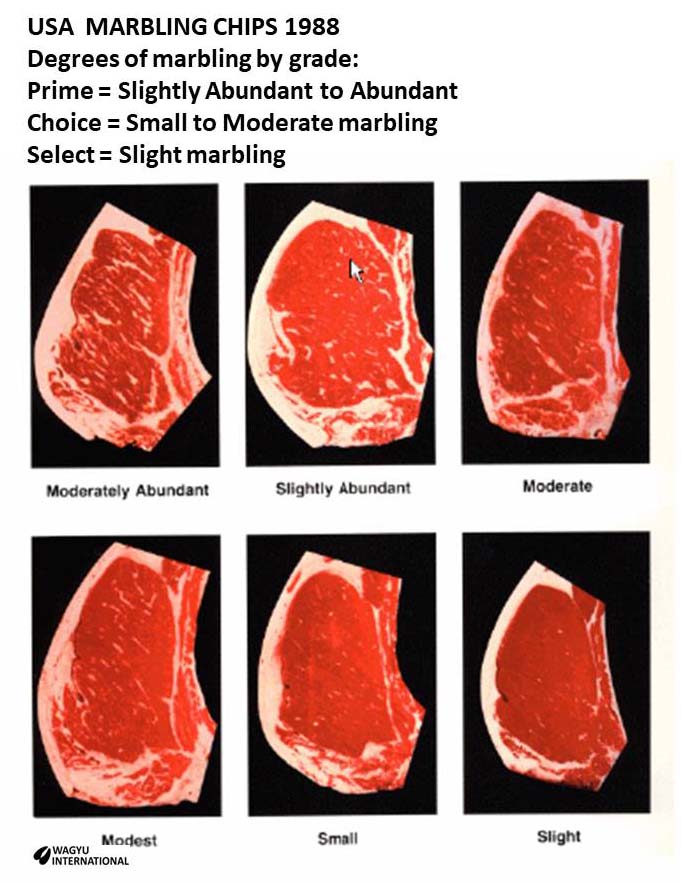 In Australia, the highest marble score from AUS-MEAT is 9 and this is awarded for a minimum intramuscular fat content of 21% but a sample that were digital imaged gave an average of 39% with the highest just below 50% that were graded AUS-MEAT marble score 9, or MSA marble score 1190. 30% of Wagyu Fullblood grade 9 so many of them are likely to exceed it. Superior marbling is graded 9+ even though there is no standard for it, but it is awarded to those that are considered to be superior to those that grade 9.

Both USA and Australia Wagyu producers have the same constraint that their grading system does not cater for the entire Wagyu population at slaughter.

In Japan, the lowest BMS marble score that is mesasured is 3. Anything lighter is 2, and an abscence is graded 1. BMS 3 requiresa minimum intramuscular fat % of 21%. The highest score of 12 requires a minimum intramuscualr fat content of 57% but some attain 68% from digital imaging.

The chart below shows the minimum intramuscualr fat percentage content in these markets for each marbling grade.

Semen & Embryos accredited for export into USA or available within: