Outside Japan, the AUS-MEAT grading system has become the industry standard and it is used for measuring traits for BLUP analysis for breeding merit by BREEDPLAN. Unfortunately the Marble Score does not go high enough to differentiate the top 33% of Fullblood Wagyu carcasses in Australia so the MIJ camera is relied upon to differentiate performance in operations that achieve the highest quality.

Wagyu International developed a grading system to enable the evaluation of nutrition and genetics clients to make in-house comparisons in order to be able to monitor progress where there is a lack of local grading. 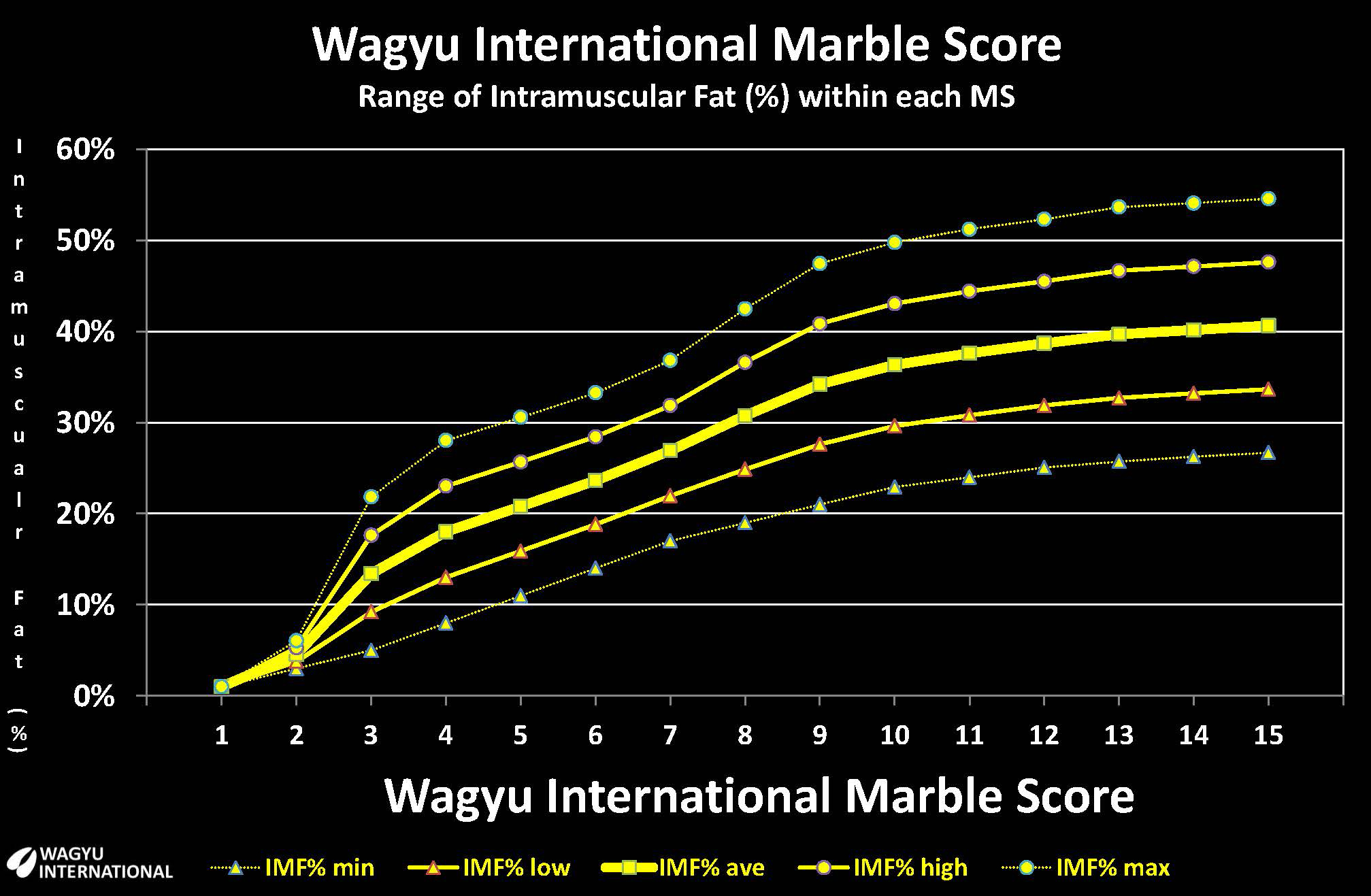 There is considerable variation of intramuscular fat content (IMF%) in a band within each AUS-MEAT Marble score and within each BMS that is graded in Australia and in Japan. Intermuscular (seam) fat is not included in the intramuscular fat evaluation. This fat between muscles is deposited in the young calf before subcutaneous fat.
In Japan, reliance on marbling percent (IMF%) for value through the BMS grading has resulted in an increase in coarseness of marbling. IMF% is the sum of fine and coarse particles and the properties of the components of marbling were investigated by Professor Kuchida who pioneered the Obihiro University digital camera.
Keisuke Kato reported the findings in 2014 and the New Fineness Index (NFI) was introduced. The Fineness Index that it has replaced measured the incidence of fine marbling particles that had a surface area from 0.01 to 0.5 cm2. The NFI is the value obtained by dividing the total perimeter of the fine marbled particles in M. longissimus in the loin core by the square root of the loin core area. The larger the value, the finer the marbling is. The average was 7.7 pixel/cm from 8,422 samples. The Fineness index of marbling from the same sample averaged 3.3 counts/cm2.

The Coarseness index of marbling expresses the degree of coarse marbling of the entire marbled particles in the loin. An average of 16.3% was reported. The maximum coarseness particle size was 42.6%. The genetic correlation between the conventional fineness index and the coarseness index was strongly negative (-0.93).
The heritability of these measures of marbling is presented in the table below: 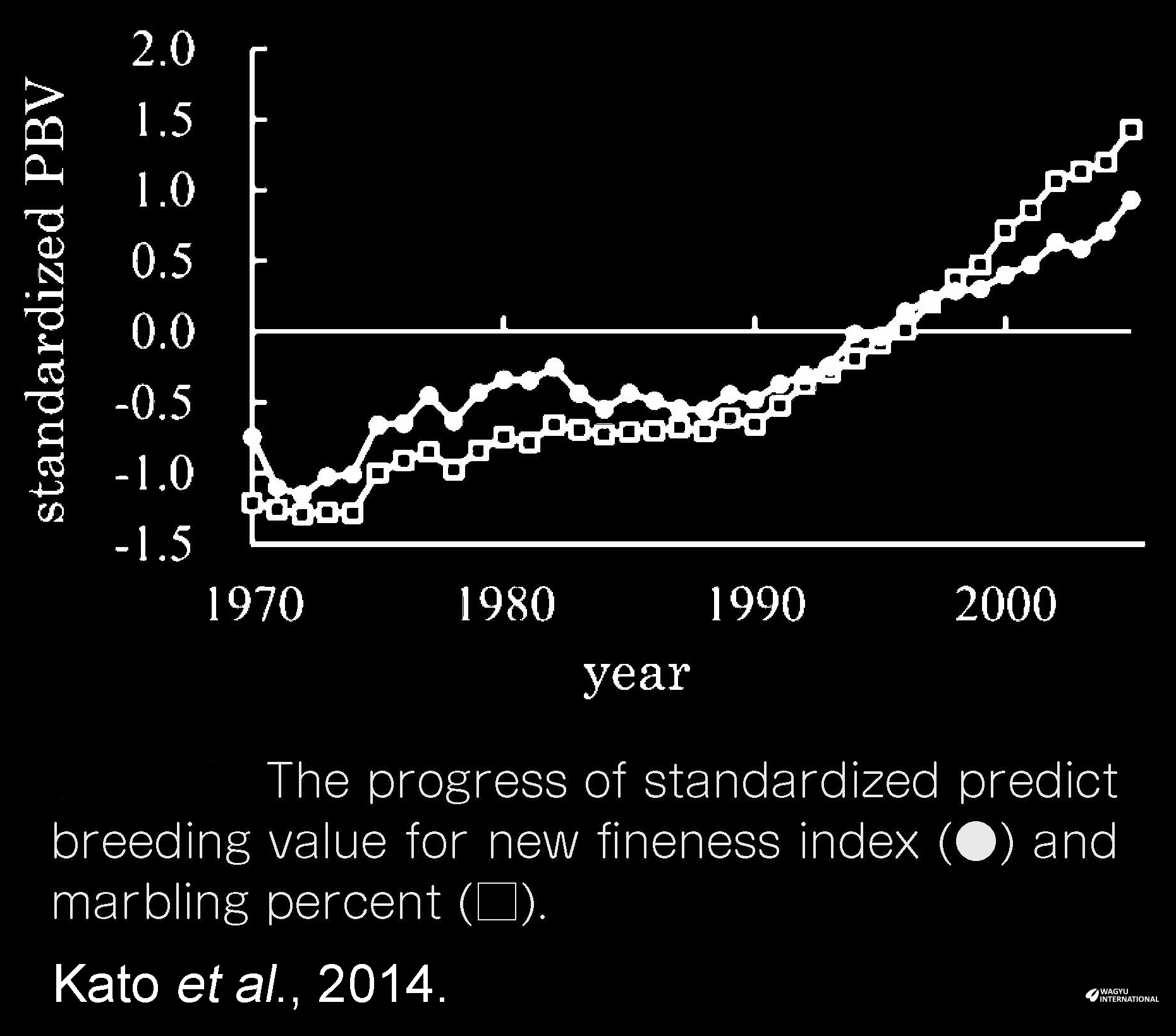 Keisuke Kato displayed Standardized Predict Breeding Values for Marbling Percent in hollow squares and New fineness index of marbling with solid circles from 1970. The focus in Japan has been of improving BMS since 1990 and there has been a notable increase in IMF% breeding values through to 2005. Despite the high correlation with NFI, the NFI breeding value has lagged. The author attributes this to the increase in coarseness of marbling in the rib eye area that has resulted from the focus on BMS. IMF% has increased from gains in both fine and coarse particles. This paper was published in 2014 and since then the focus is on increasing fineness of marbling. The use of the MIJ camera enables this.

Examples of abundant fine and coarse marbling particles from Japan are shown below: 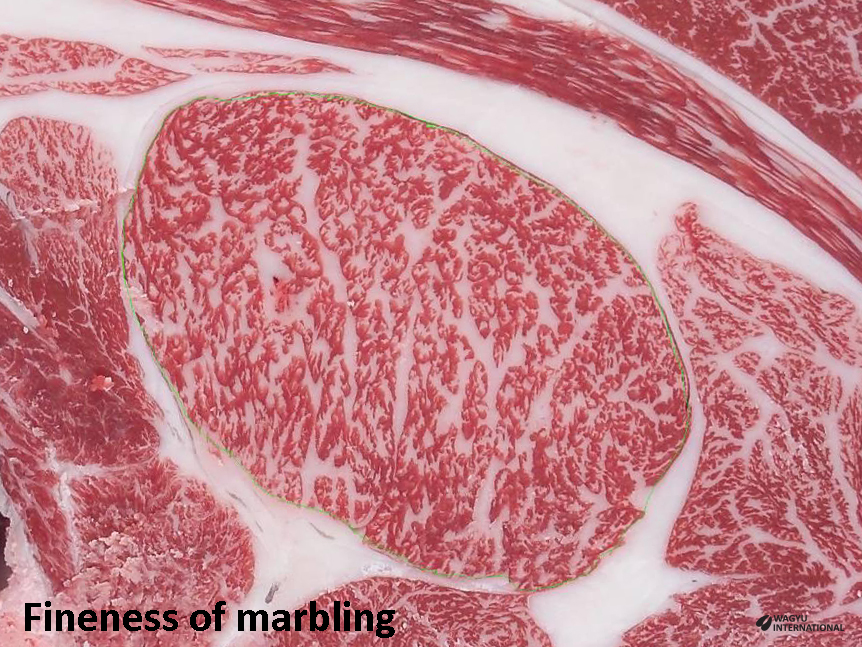 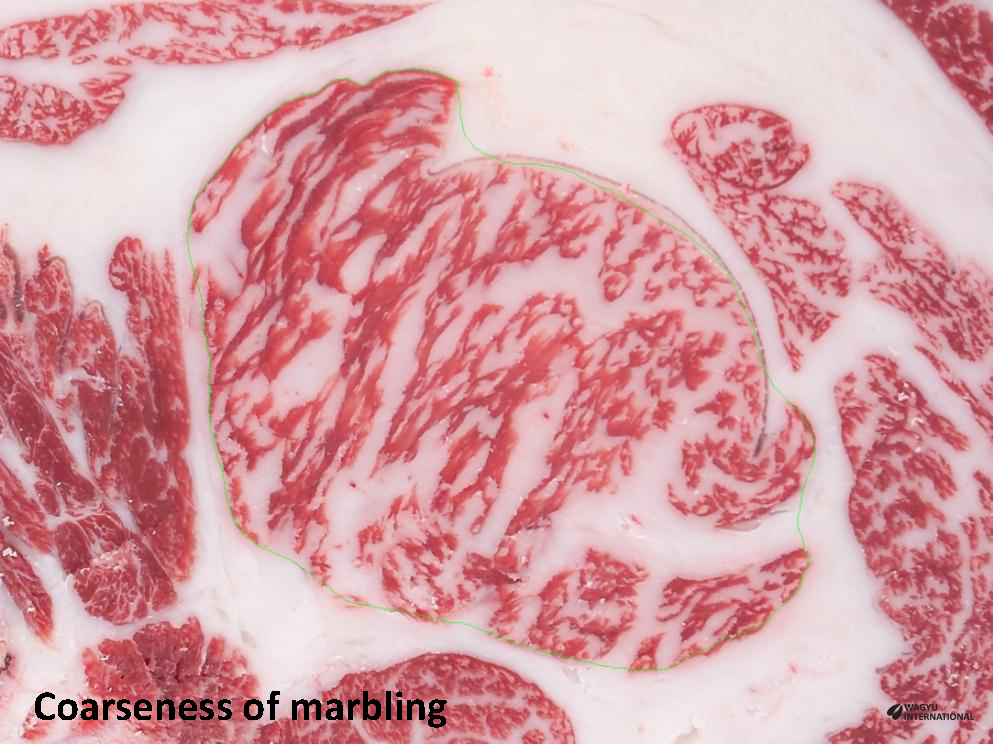 Images that have been received by Wagyu International from pasture finishing of F2 crosses through to Fullblood have revealed excellent fineness in some cases but there is also a high incidence of coarse particles. In order to differentiate the more severe cases, Wagyu International gives a score for Marble coarseness (moderate) and another - when required - for Marble Coarseness (heavy). Each score is an integer and is indicative of the incidence of coarse marbling particles. It has been obtained from a visual assessment so does not have a quantitive base but it can be used to compare different carcasses that have been scored by Wagyu International as the same individual makes all of the evaluations.

Rib Fat Thickness is measured during processing as an indication of backfat thickness.

An overall grade is given when both of the above assessments have been completed.

Undoubtedly, the MIJ camera provides the most accurate measurement of carcass traits in numerous algorithms. AUS-MEAT provides a measurement against industry standards but the MSA grading scheme that runs in tandem with it but also brings in an eating quality perspective. Wagyu International also takes grading that one step further by overriding the measurements taken and giving an a final grade that is projected on eating quality.

Examples of some carcasses that have been graded for marbling:

Click on the animal's name in the table to open that page.