The Wagyu cattle breed has origins from such a small population that was originally exported from Japan that a Rotation has been advocated to ensure sustainability by segregating breeders into groups so that animals that are the most diverse are joined. Mr Shogo Takeda advocated a rotation because he was concerned that too much selection pressure for marbling in this new breed was resulting in a loss of size. Wagyu International has reviewed his objectives and implemented a more modern approach after also analysing trends in Japan.
The Founders that left Japan were related to leading sires at that time and many of those ancestors are evident in the pedigrees of the successful modern sires in Japan in present day.
53% of the genotype in the Founders' population trace back to the Hyōgo prefecture in Japan. They are recorded back to Nakadoi and subsequently through the celebrated sire Tajiri. The popular name used outside Japan for Wagyu from Hyōgo is "Tajima". Accordingly two out of the four groups in the rotation are Tajima because they made up half of the initial population. Those with the highest Tajima content, and co-incidentally, smaller size, are in Group B in the Wagyu International Fullblood Rotation (wiR). Group D has lower Tajima content and includes Kumanami Tajima. Despite variation within the Tajima lines, it is broadly considered to have higher marbling and overall carcass quality or better "carcass" traits. Wagyu with origins from the other prefectures have higher growth rate, size and some milk which are a legacy from the small window of crossbreeding more than 100 years ago. This type is considered to have "maternal" traits and they have been allocated in wiR according to a review of bovine Growth Hormone genotypes and their phenotypes in Japan. 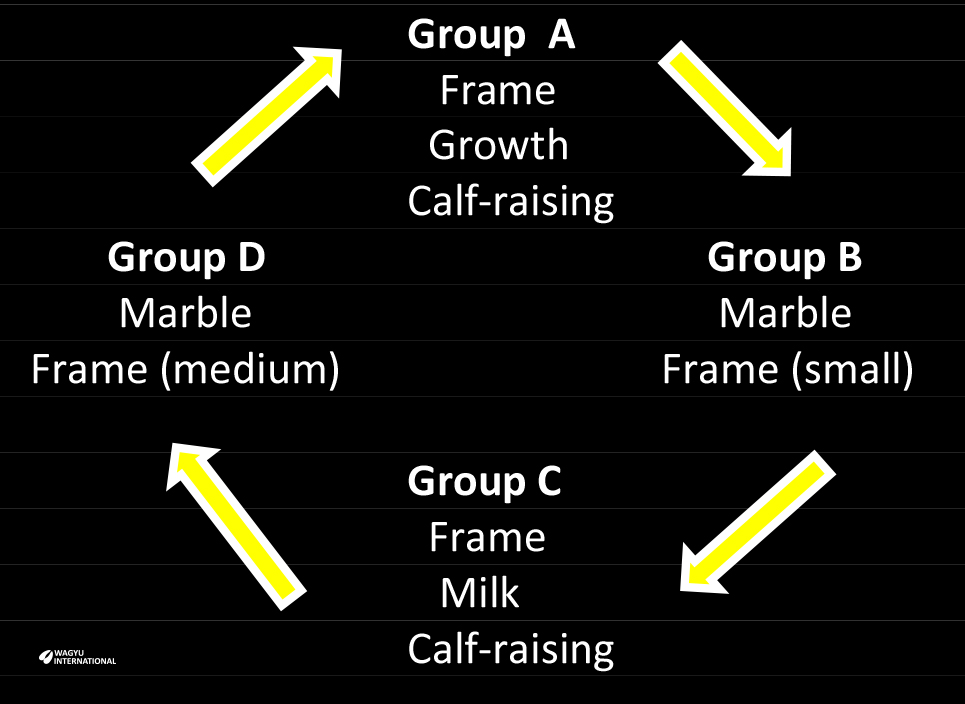 Compliance with the rotation reduces the dangers of inbreeding. At its inception the analysis only went back a few generations so the Prefectural classification was also called the 16/16 analysis.

Sires were sometimes bought by other prefectures after the indirect (progeny) test results were published so site of registration is not always the site of genetic origin. Yasufuku J930 was sired by Yasutanidoi and was born in Hyōgo but after he was bought by Gifu prefecture he became known as Yasufuku (Gifu) 安福 (岐阜). Yasufuku (Miyazaki) 安福 (宮崎) was sired by Tayasudoi. Wherever possible, ancestors in Japan have been classified in wiR by their birth place and not by the prefecture in which they were registered.

Some of the original prefecture names have been replaced by others that have gained acceptance.

"Fujiyoshi" is misleading because it is a line that goes to Dai 7 Itozakura so it ends there. When it is used in prefecure classification it often used for origins in Shimane prefecture.

Details and more information about leading sires in each Group: 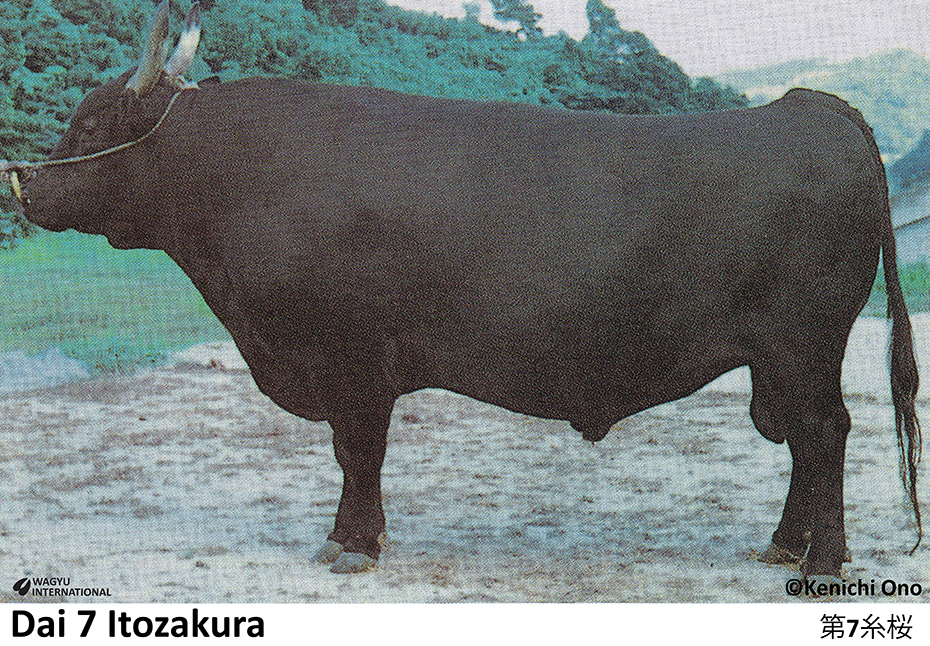 The best example of a superior Frame sire for Group A is Dai 7 Itozakura. He was bred in Yokota in Shimane prefecture but does not descend from the Shimane line even though sired by Dai 14 Shigeru from Shimane. He descends from Dai 6 Fujiyoshi of the Fujiyoshi strain who was born in Okayama. Dai 7 Itozakura is generally considered to be the founder of the modern Itozakura line. His breeding attributes were size, temperament and social interaction.
He is sire to Itohana, Itomichi, Kitaguni 7-8 (amongst many others) in Japan and several descendants through the Foundation herd. 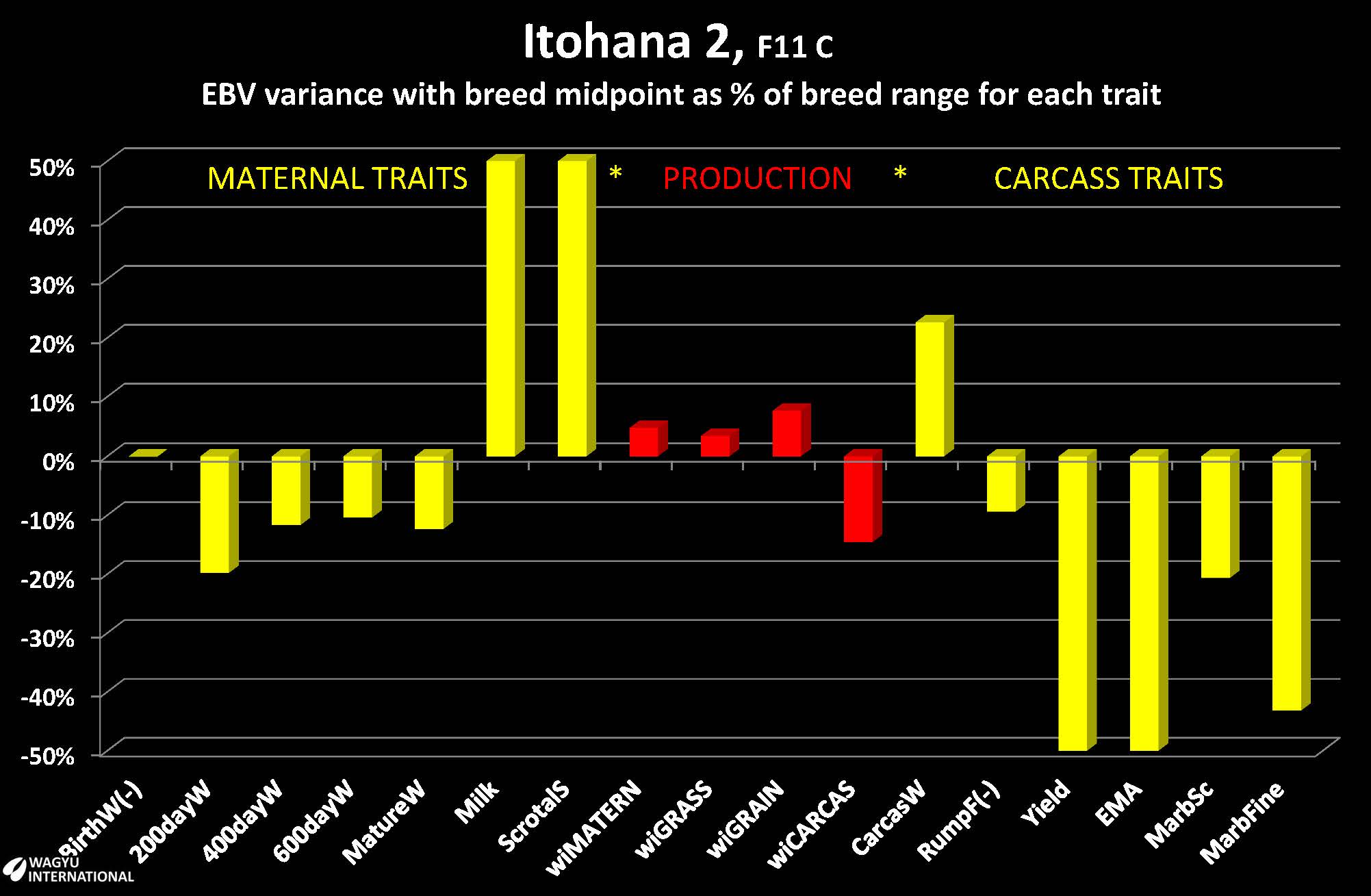 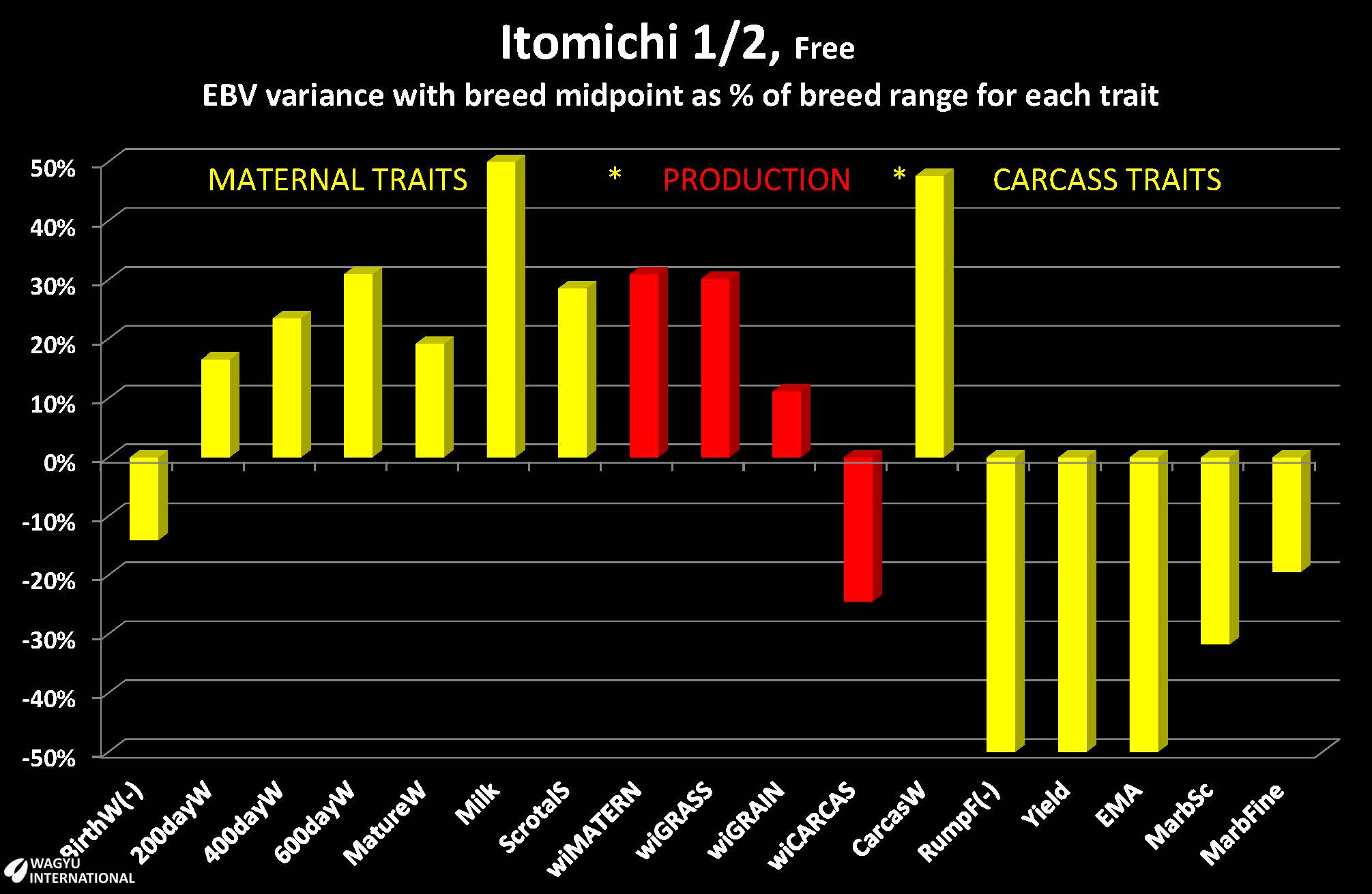 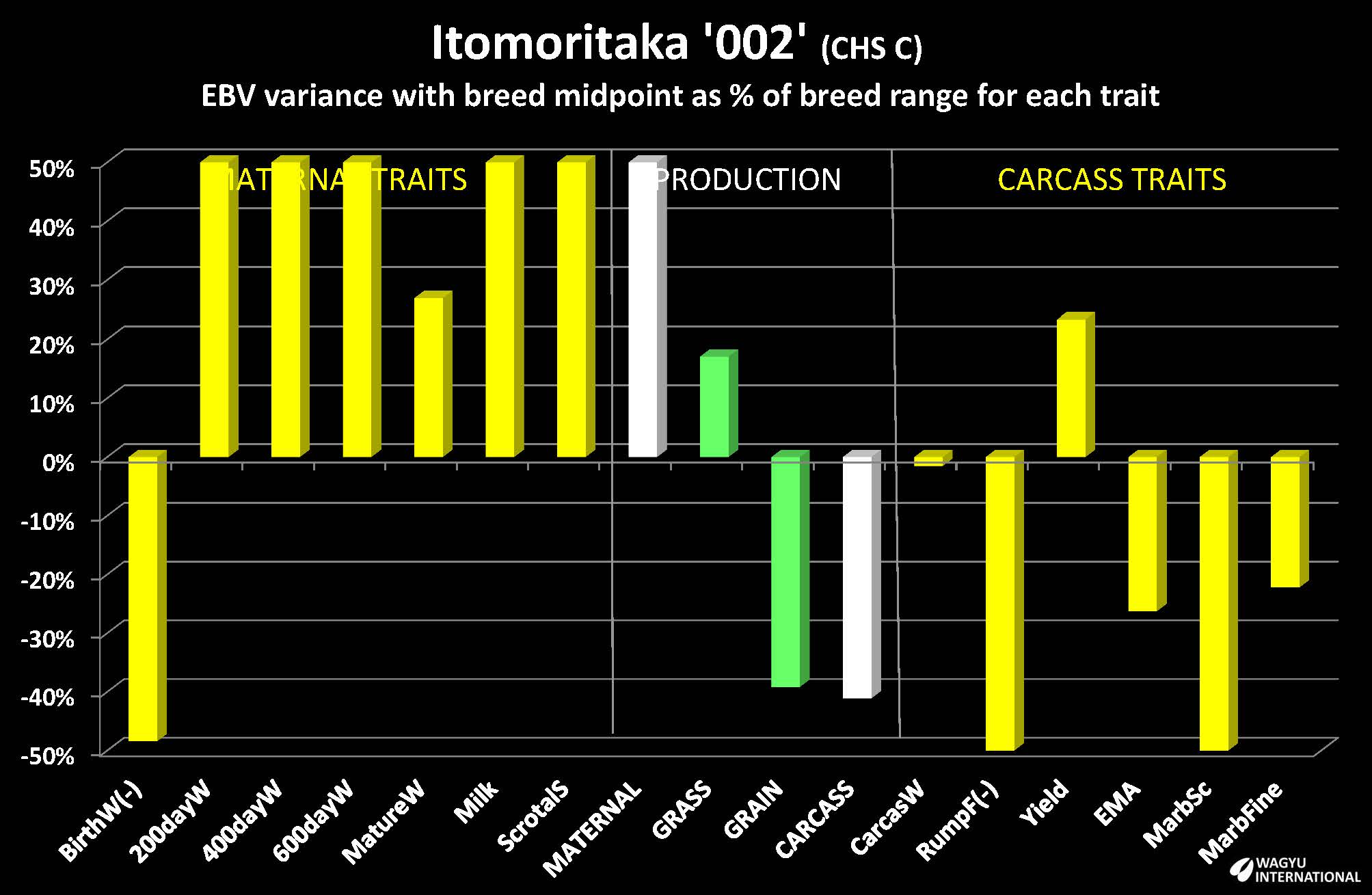 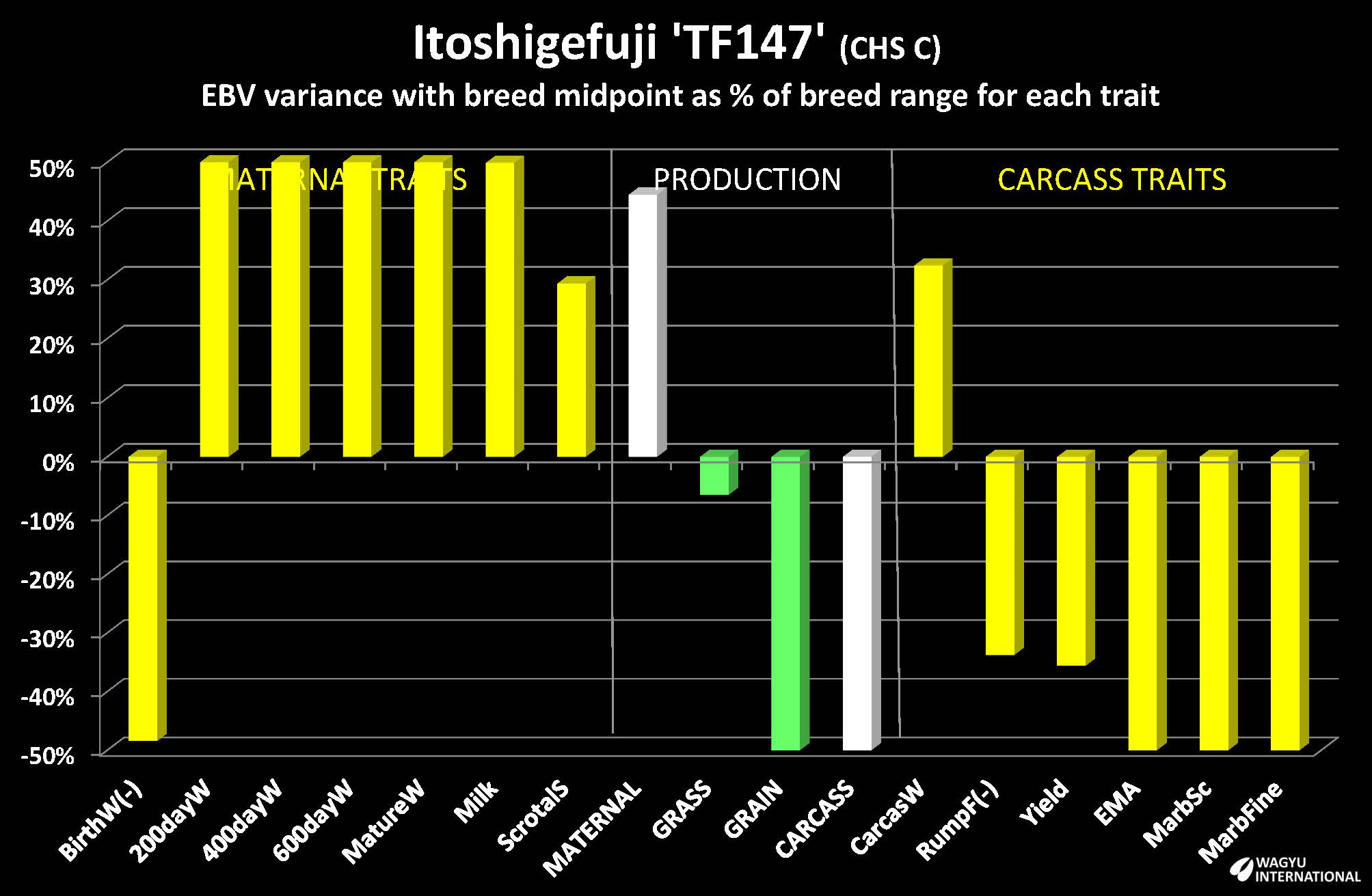 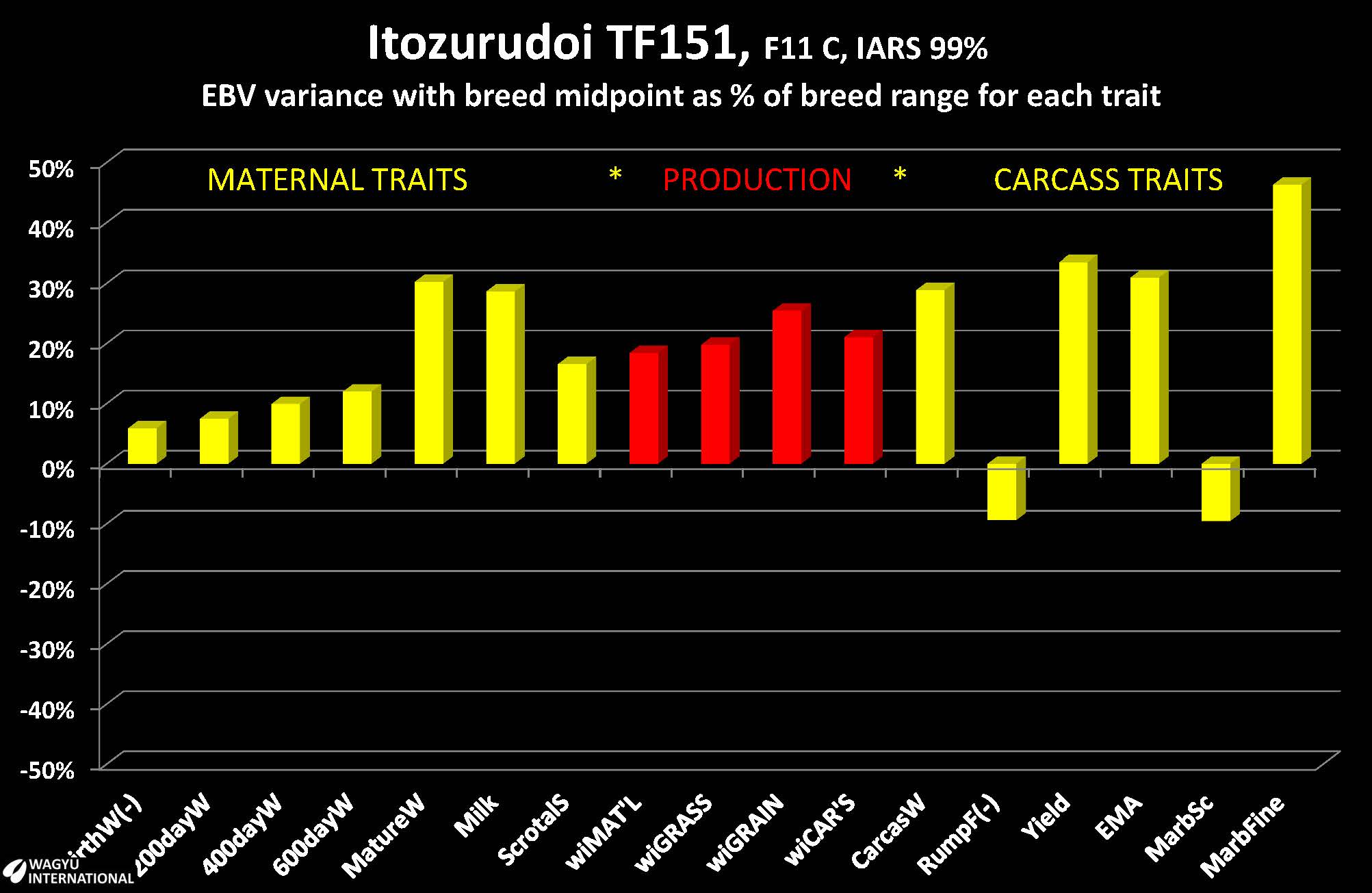 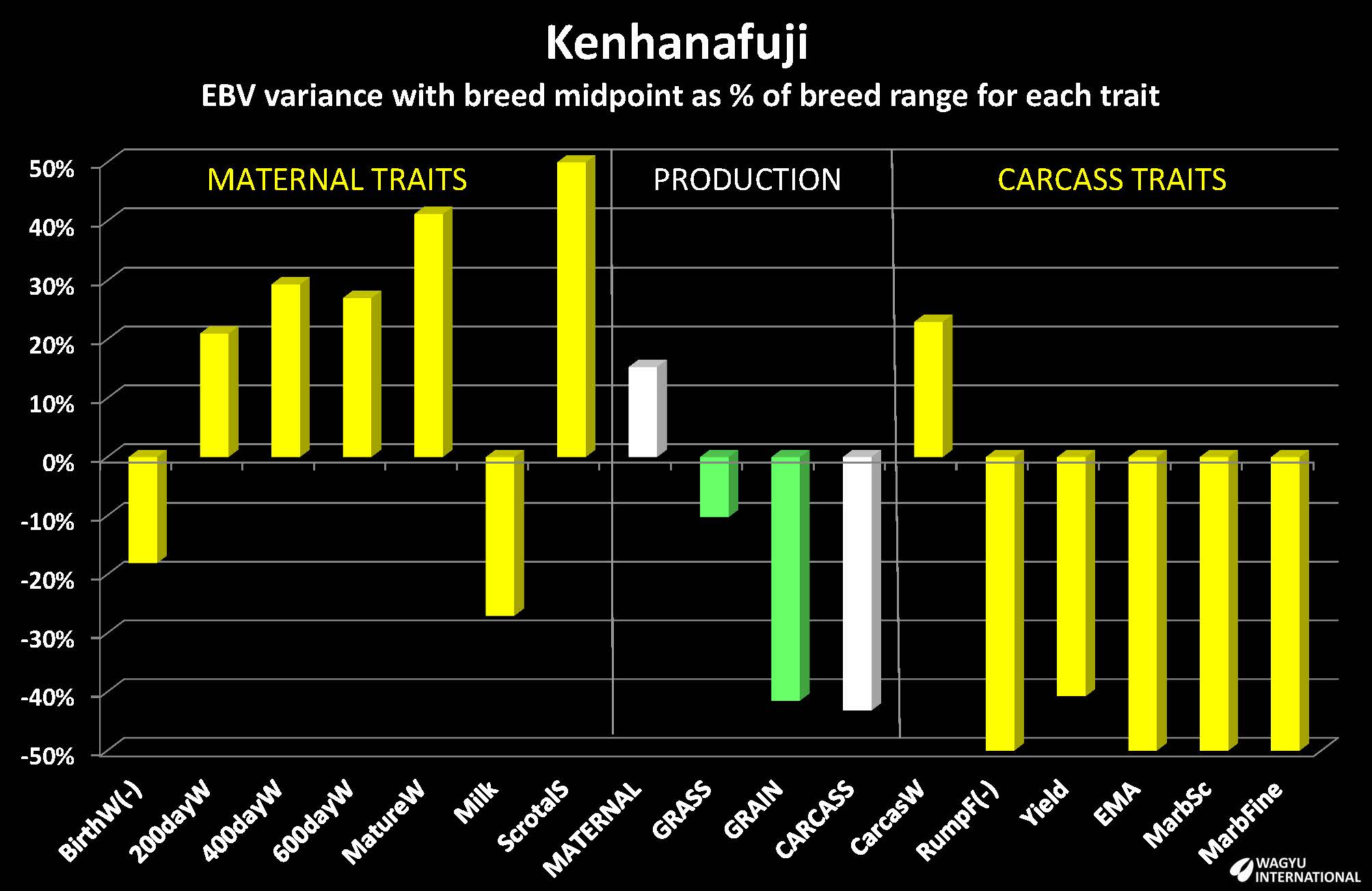 The genomic EBVs are a powerful breeding tool for the Wagyu industry outside Japan. However, faction fighting within the Australian Wagyu Association which recently has been broadcast in the public domain, and differing views from ABRI and AGBU that control BREEDPLAN, an array of BreedObjective $Indexes have been published but none of them have fulfilled my requirements. Accordingly I use my own Wagyu International Maternal and Carcass Indicators for application in the Fullblood Rotation. For the conventional grain finishing after backgrounding on grass, a Wagyu International Grain Indicator is presented. Particular attention is made to profitability from efficient finishing. There is a large market around the world producing Wagyu off pasture and with increasing sustainability pressures this sector may increase. This segment relies more heavily on maternal traits and suitability is expressed by the Wagyu International Grass Indicator. The four Production Indicators are coloured red in the following charts.

Kenhanafuji is another Group A sire with Itozakura with Shimane and the balance is Tottori. With excellent growth, the high subcutaneous fat thickness there is an associated high fertility expectation from strong scrotal size. Milk production and carcass traits will need attention.

100% Tajima and high Tajima content comprise the marbling sires in Group B.
Yasufuku became a celebrated Tajima sire in Japan and his name means "palace". 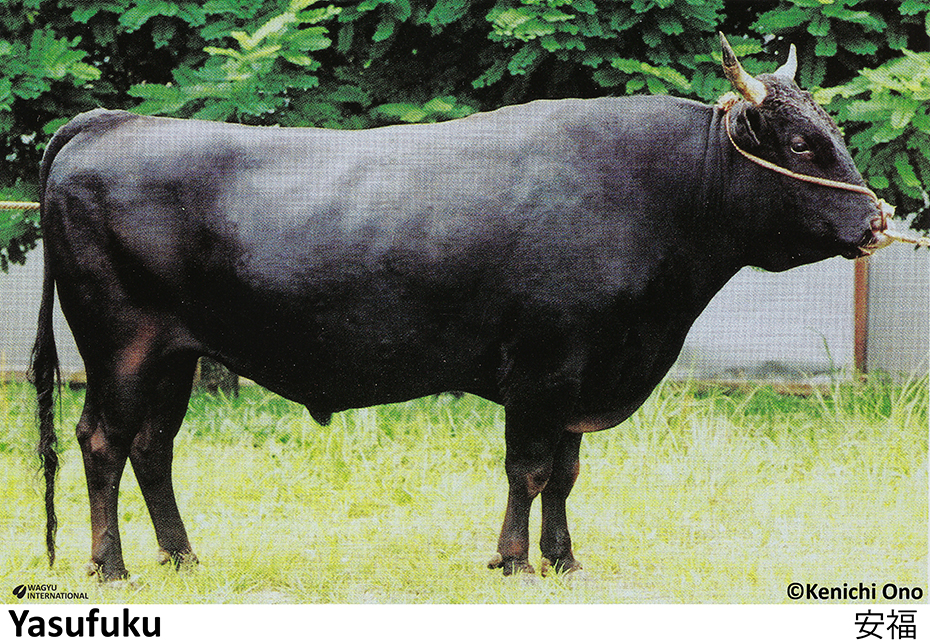 He scored top position in his progeny test in 1984 and set a high standard of carcass quality. The detection of the recessive genetic condition CL16 prompted the integration of other lines to reduce the presence of the recessives. His prowess was proved with the endorsement of superior sons by their published predicted breeding values which exceeded those from Yasufuku.

The variability of marbling EBVs within Tajima sires is demonstrated in the following charts with published EBVs from Breedplan: 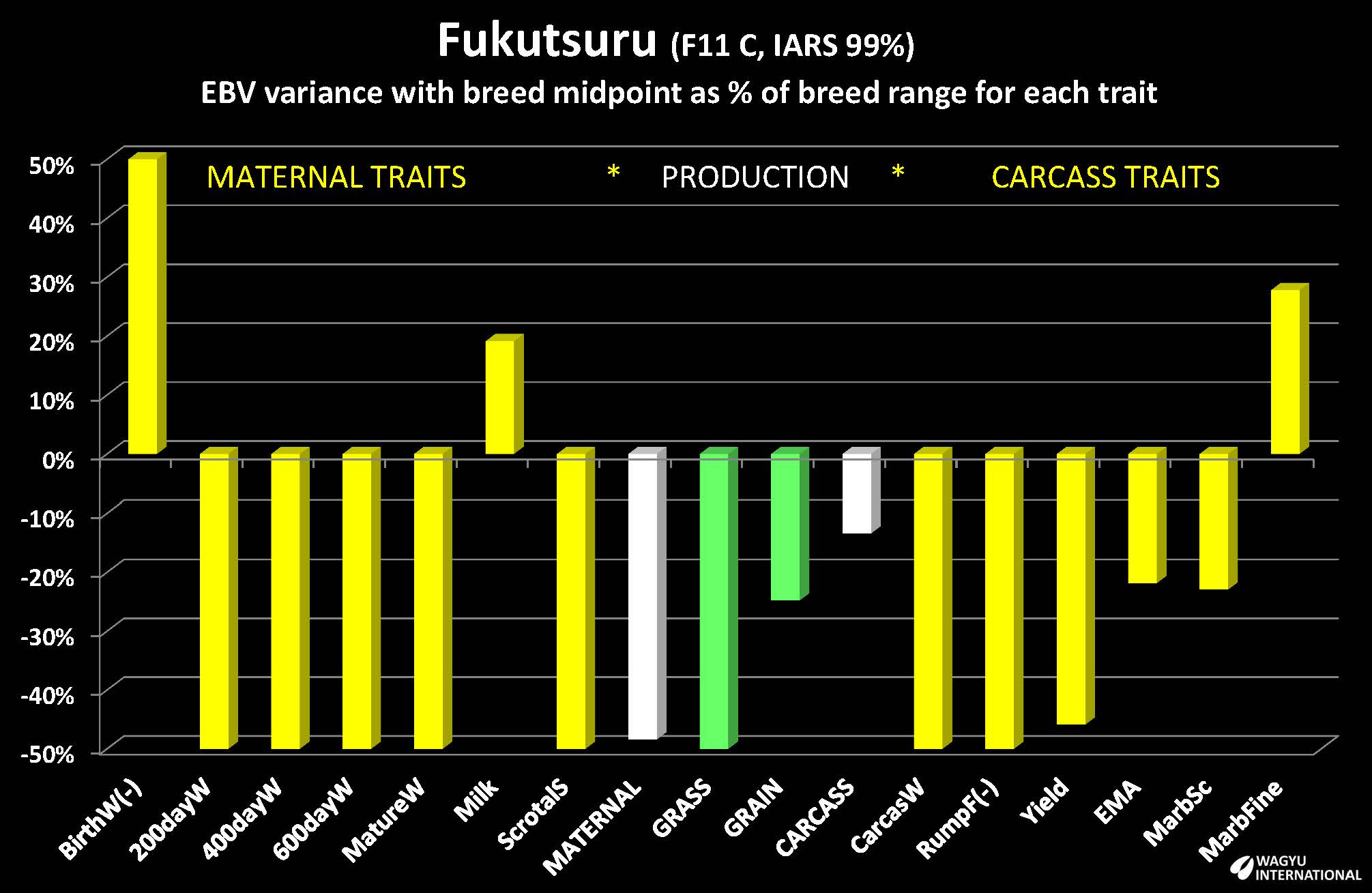 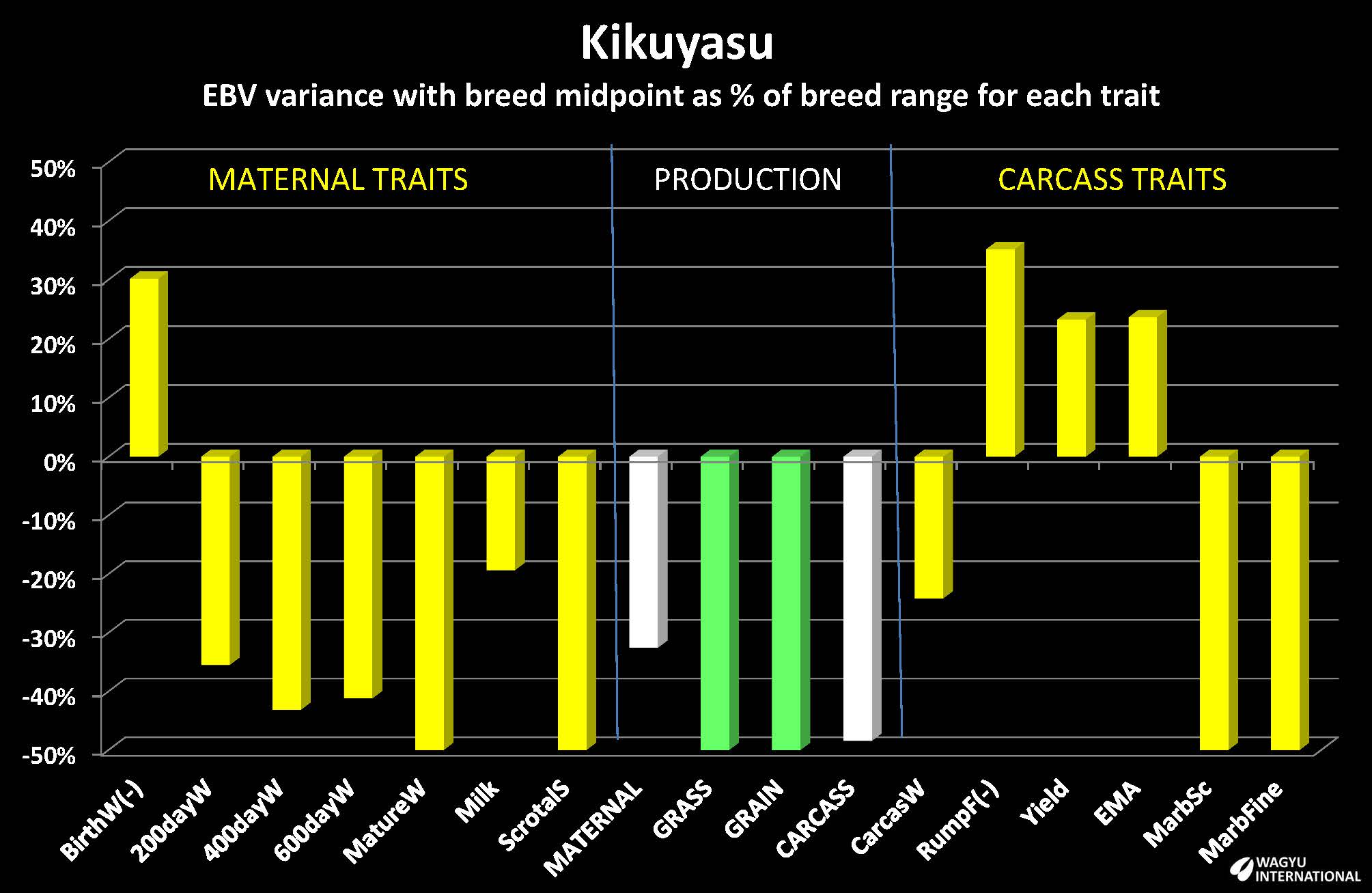 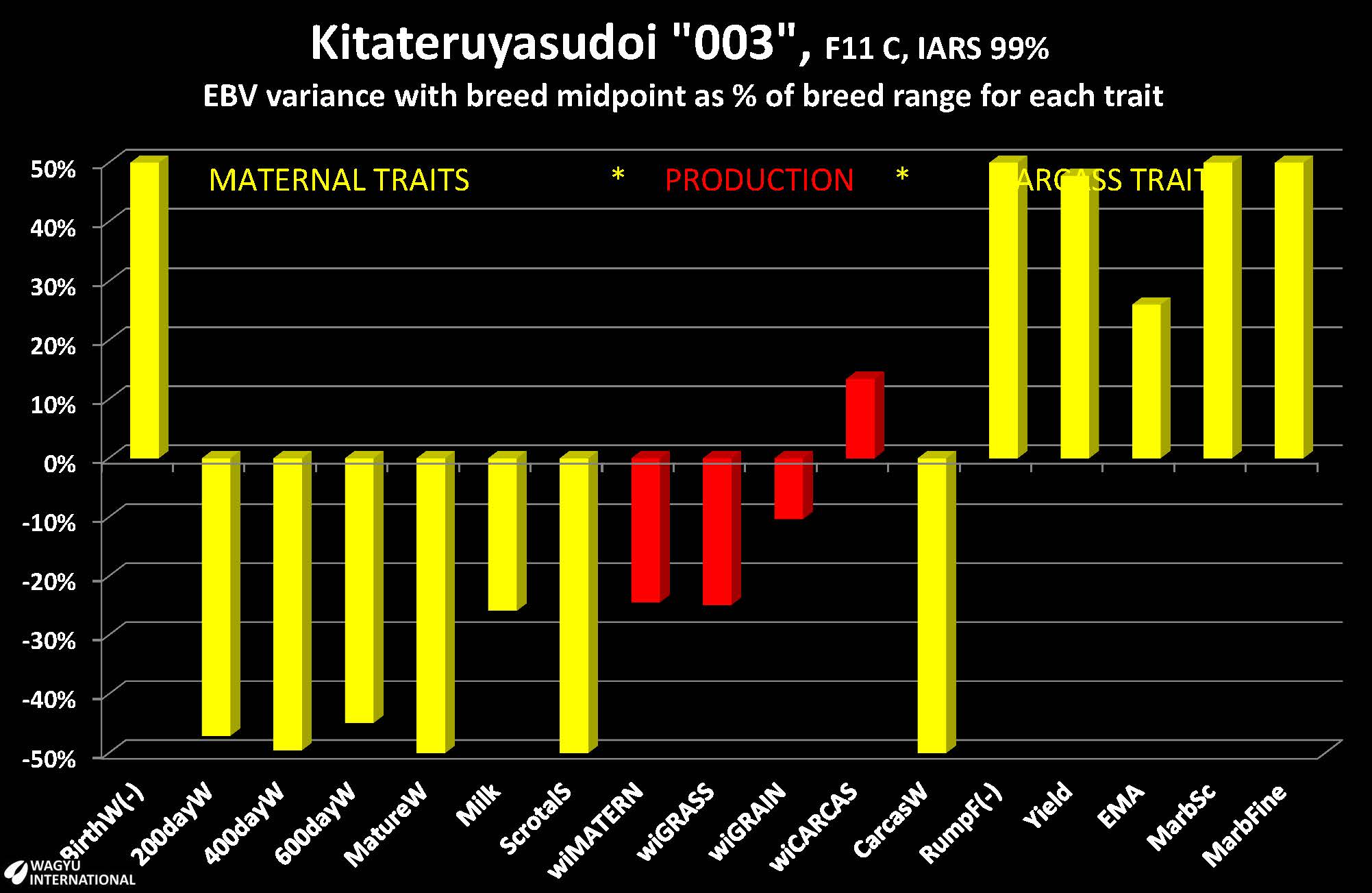 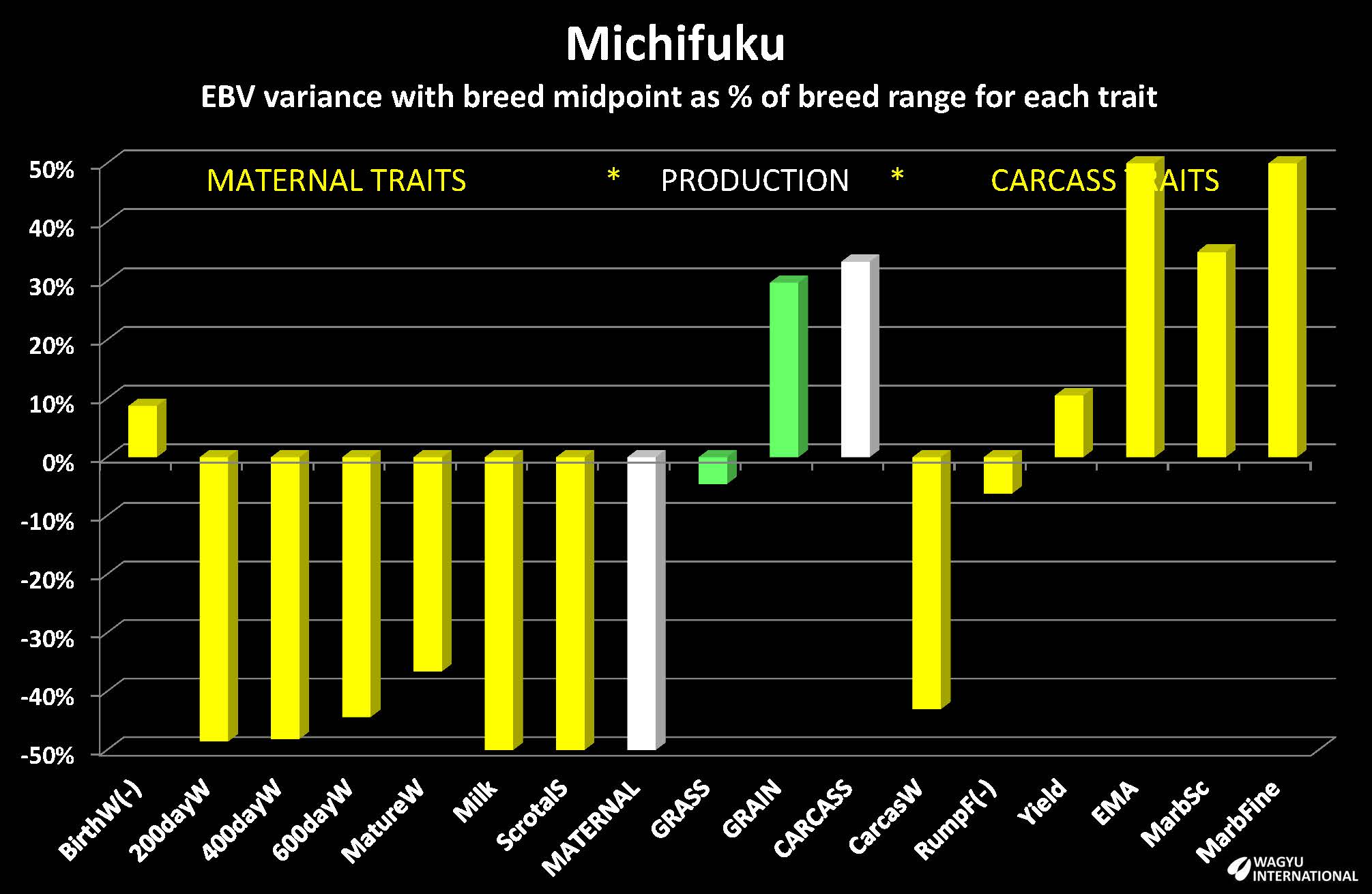 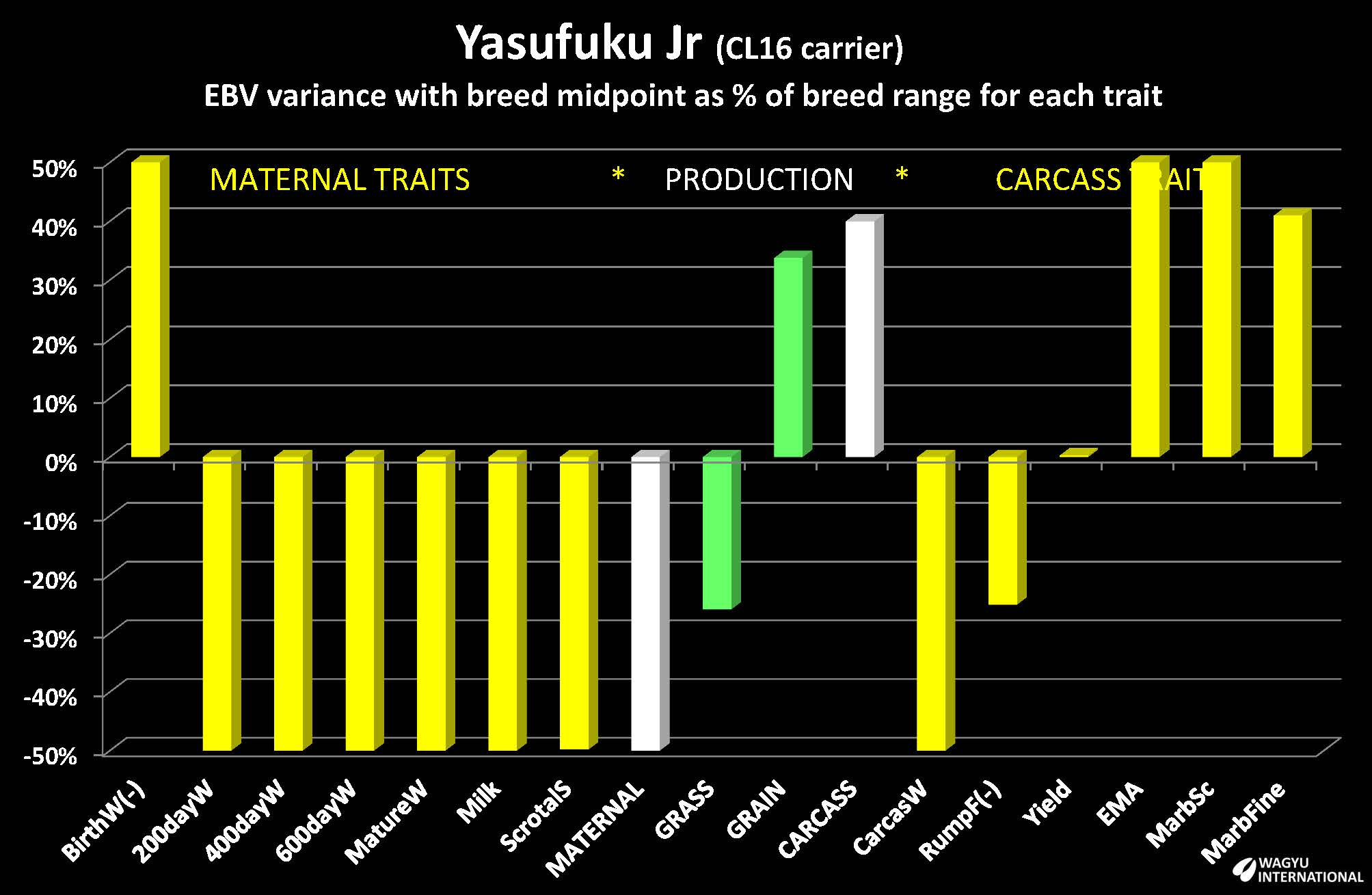 Fukutsuru J068 is popular in USA and Europe when he was ranked top for marbling EPDs by Washington State and subcutaneous fat thickness was amongst the highest too. 7 for tenderness and AA for SCD are also popular results. Carcass progeny and genomic EBVs are favourable for low birth weight, milk yield and fineness of marbling. Favourable flavour is expected from his sire in Japan.

Kikuyasu is popular in USA and Europe because of his high live weightbecause he was the heaviest Tajima bull. His genomic EBVs are low for growth when compared with the Wagyu breed in general but even though much lower than average for the breed, the early growth rate is only 25% below breed average, but it progressively declines. Progeny from Kikuyasudoi, his sire, also had low growth rate in Japan. Kikuyasu J400's strongest attributes from carcass progeny and genomic EBV are low birth weight, light subcutaneous fat thickness, high retail yield and good eye muscle area. Light growth rate in progeny requires an extremely long period of finishing.

Kitateruyasudoi has low growth EBVs which are typical for Tajima but the WI Maternal Indicator is only -25%. The carcass progeny and genomic EBVs confirm overall excellence in carcass traits. Fat quality should be favourable because progeny from his sire Terunagdoi have scored well in Japan. Kitateruyasudoi from the Westholme herd has always been a popular sire in the feedlot driven industry in Australia.

Progeny from Michfuku have always been popular amongst imports back to Japan because he is used over large frame cows but imparts exceptional carcas traits as illustrated by his carcass progeney and genomic EBVs in the chart above. Michifuku has the highest number of registered progeny in Australia for the highest Tajima content foundation sires.

Yasuku Jr has always been favoured by USA breeders so carcass data from USA has been submitted to Australian BreedPlan and his carcass quality is endorsed amongst the best for EMA, marble score and marble fineness. The number of registered progeny is comparatvely light in Australia, even though there are double the number there than in the USA.

There are four major substrains from Tottori Prefecture. They are Kedaka, Eikou, Touhou and Hana. One of the first four exports from Japan, Mazda, is from Tottori prefecture but has Touhou three times in his pedigree.
Dai 20 Hirashige is from Tottori prefecture from Kedaka blood so he is core to Group C because he has been used so extensively in Fullblood breeding. Both his sire and his mother's sire was the Kedaka bull called Kedaka. Kedaka has a maternal descendant from Hyōgo so he has some Tajima influence so that flows through his line but this is overlooked in some modern classifications. Dai 20 Hirashige was used extensively in Japan and even in pedigrees in modern sires, he has a strong presence. 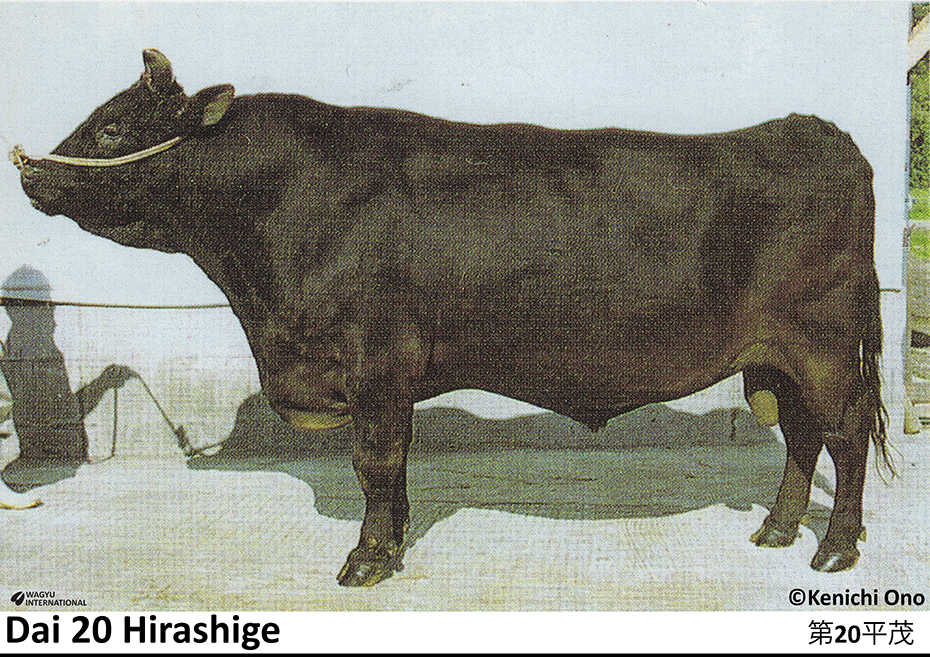 Hirashigetayasu "001" is the son of Dai 20 Hirashige and his semen has been used extensively in the Fullblood rotation Group C. 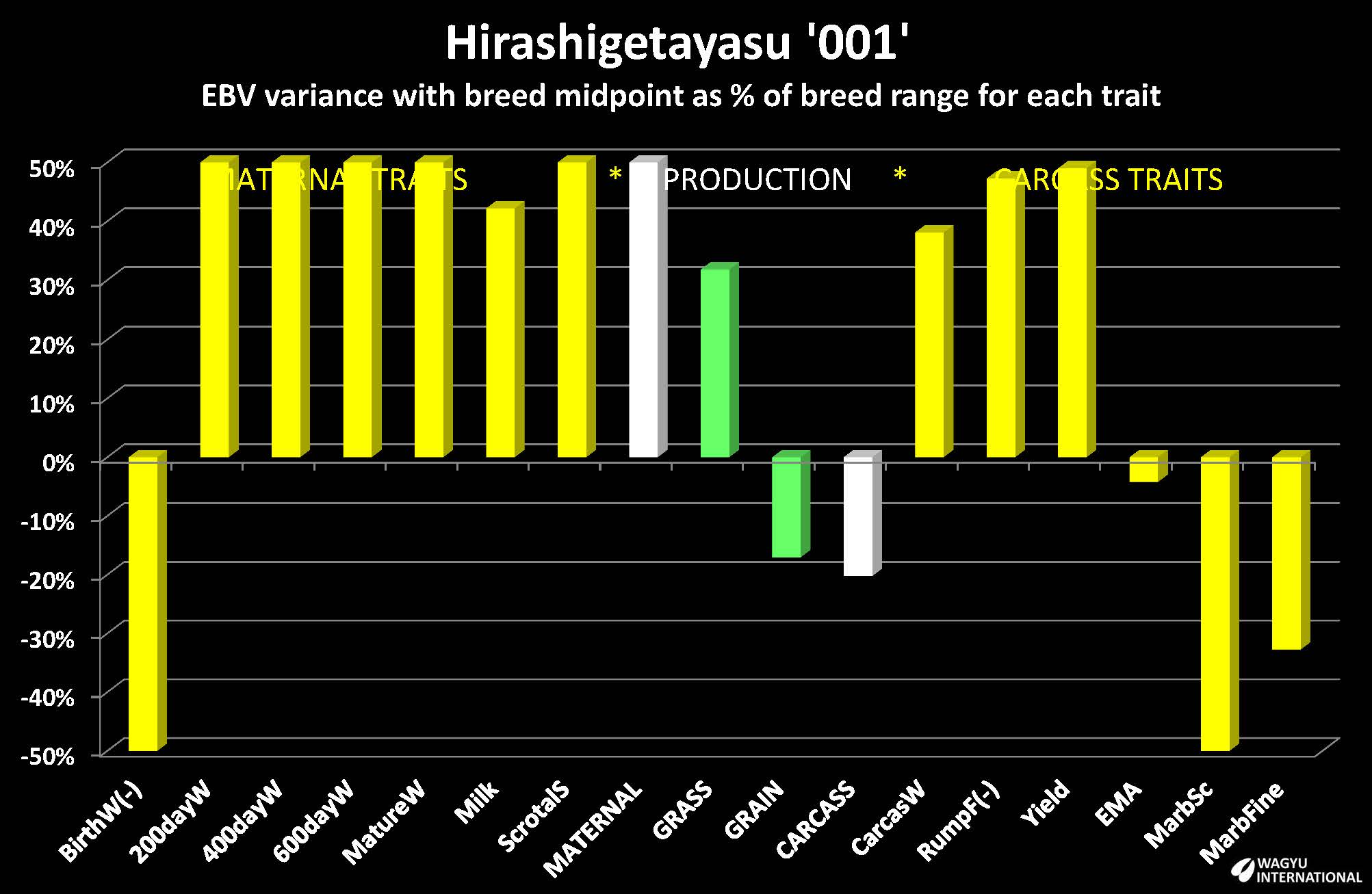 Shigeshigenami was born in Hyōgo prefecture. His father was Shigekananami and Shigeshigenami’s mother was also sired by Shigekananami.
Initially he had a low profile because his progeny were not the typical Hyōgo type offspring. However in 1985 he had sired the Grand and Reserve Grand Champion carcasses at the prestigious All Japan Carcass Competition so demand swung over to him. 30% of all offspring were from him in that year. 73% of all of his carcasses were in the highest grade. More than 100,000 carcases from Shigeshigenami had positioned the Kumanami bloodline as another bloodline within the Tajima strain. He died of old age. 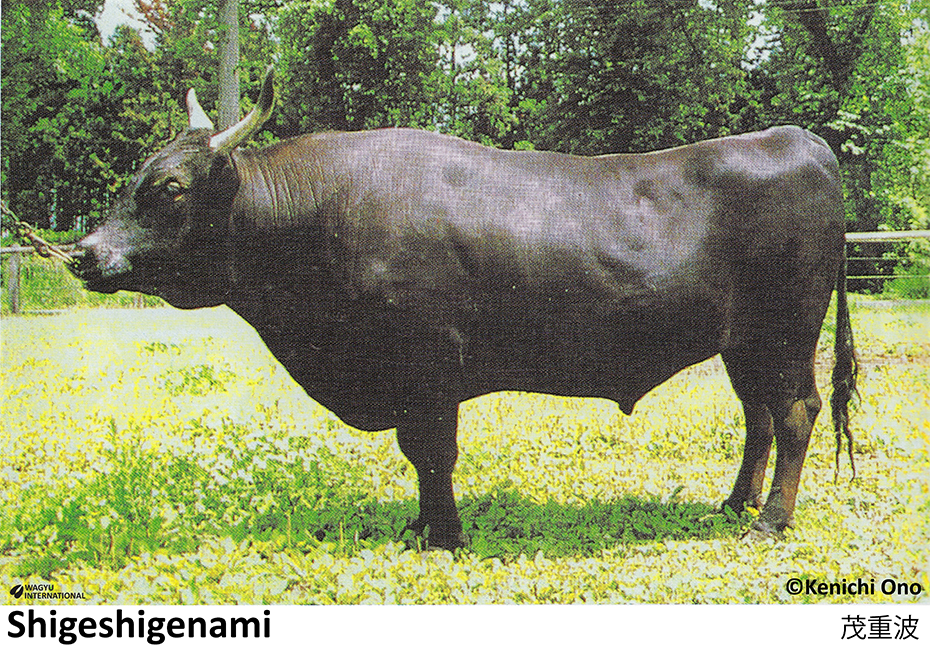 Foundation sire Itoshigenami TF148 was exported by Mr Shogo Takeda and he is son of Shigeshigenami. He is strongly Kumanami Tajima and also Shimane so is in Group D as a leading marbling sire.

Haruki II is Tajima from Monjirō as his sire and also has Shimane so he is often used in feedlots on the maternal side.He has 1,481 registered progeny in Australia 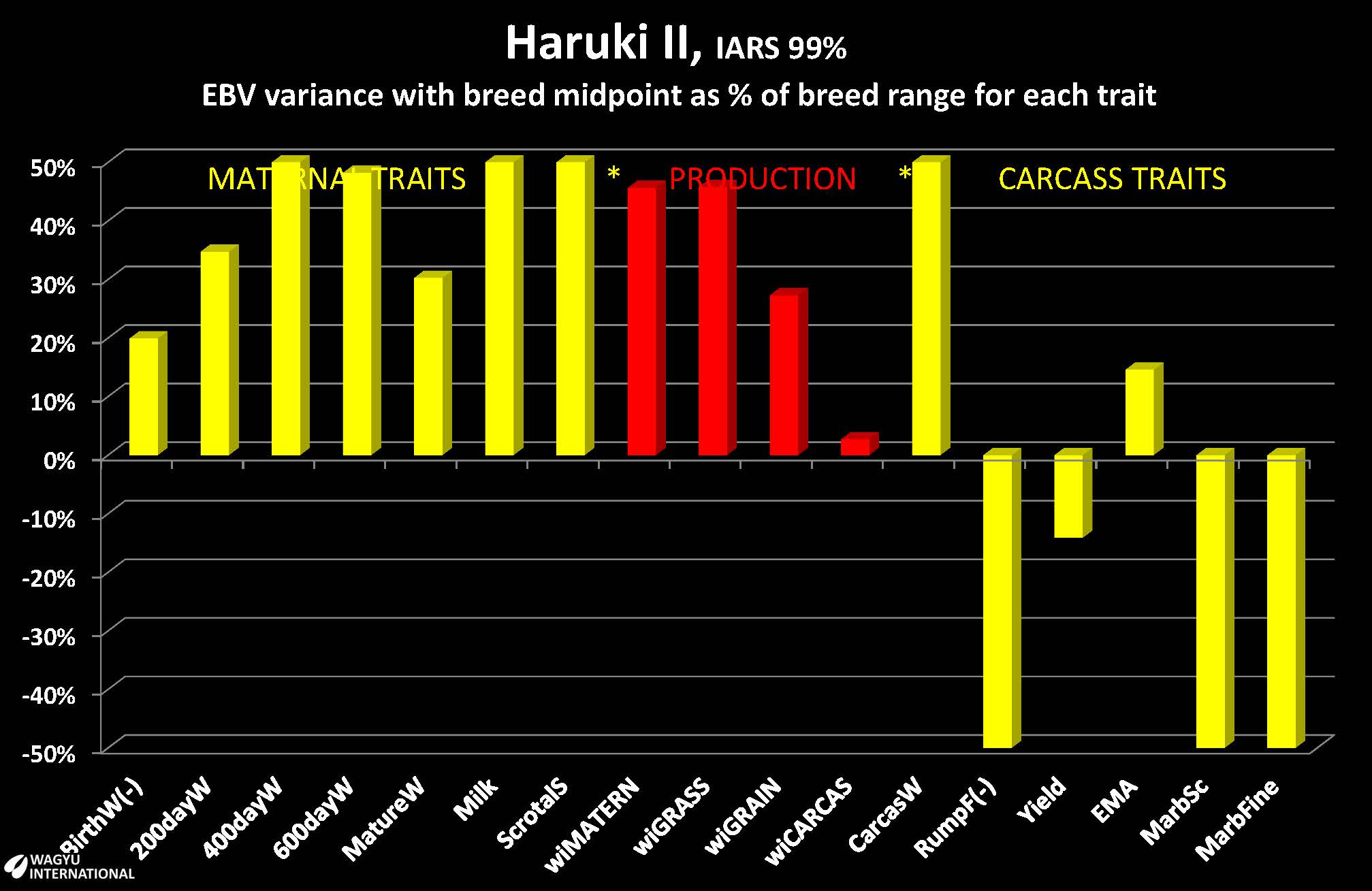 There are many other bulls with high Tajima content and super sires are outperforming the Founders and subsequent generations.

The most successful Foundation sires can be judged by the relative number of registrations in Australia and USA: 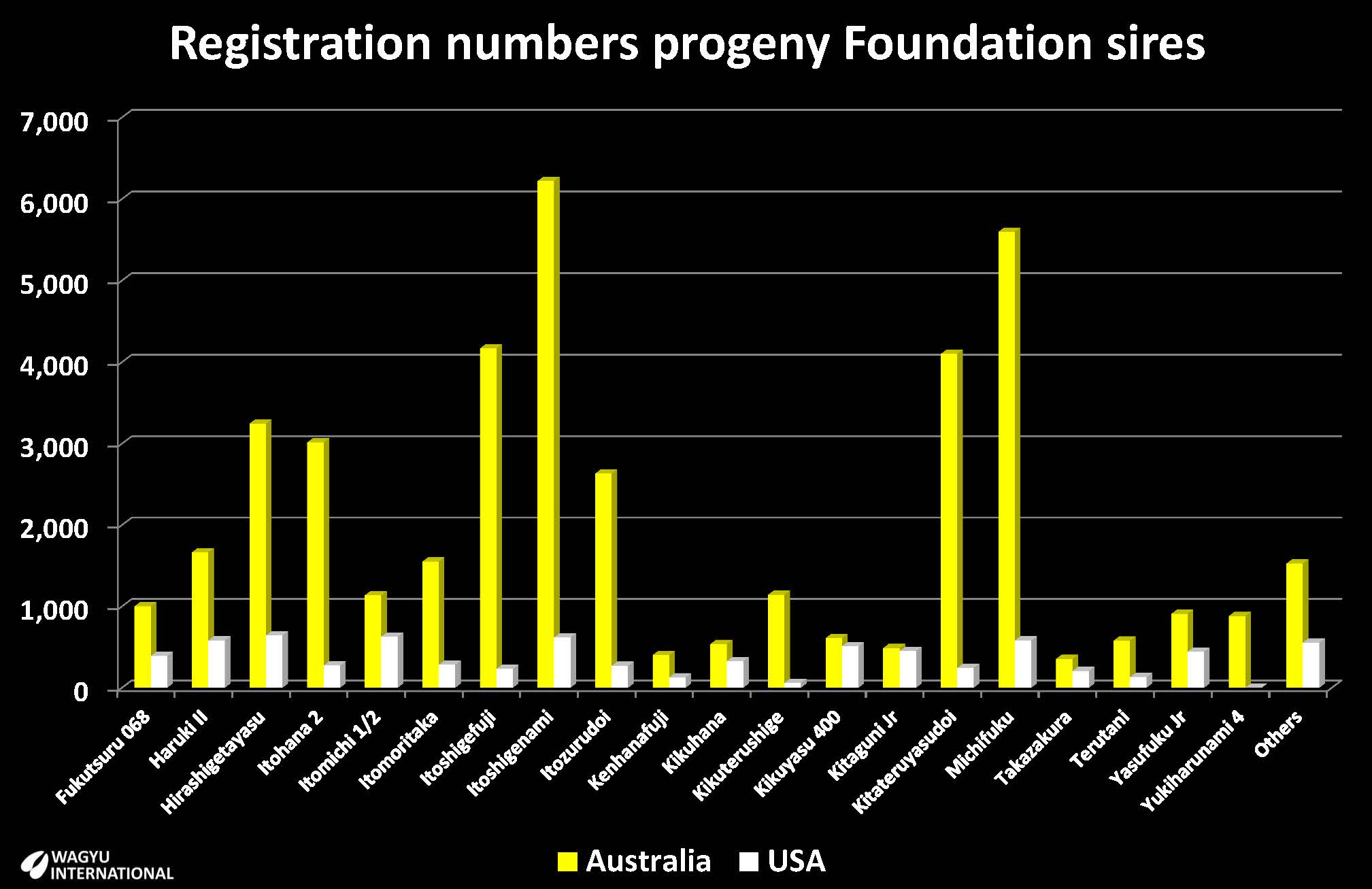 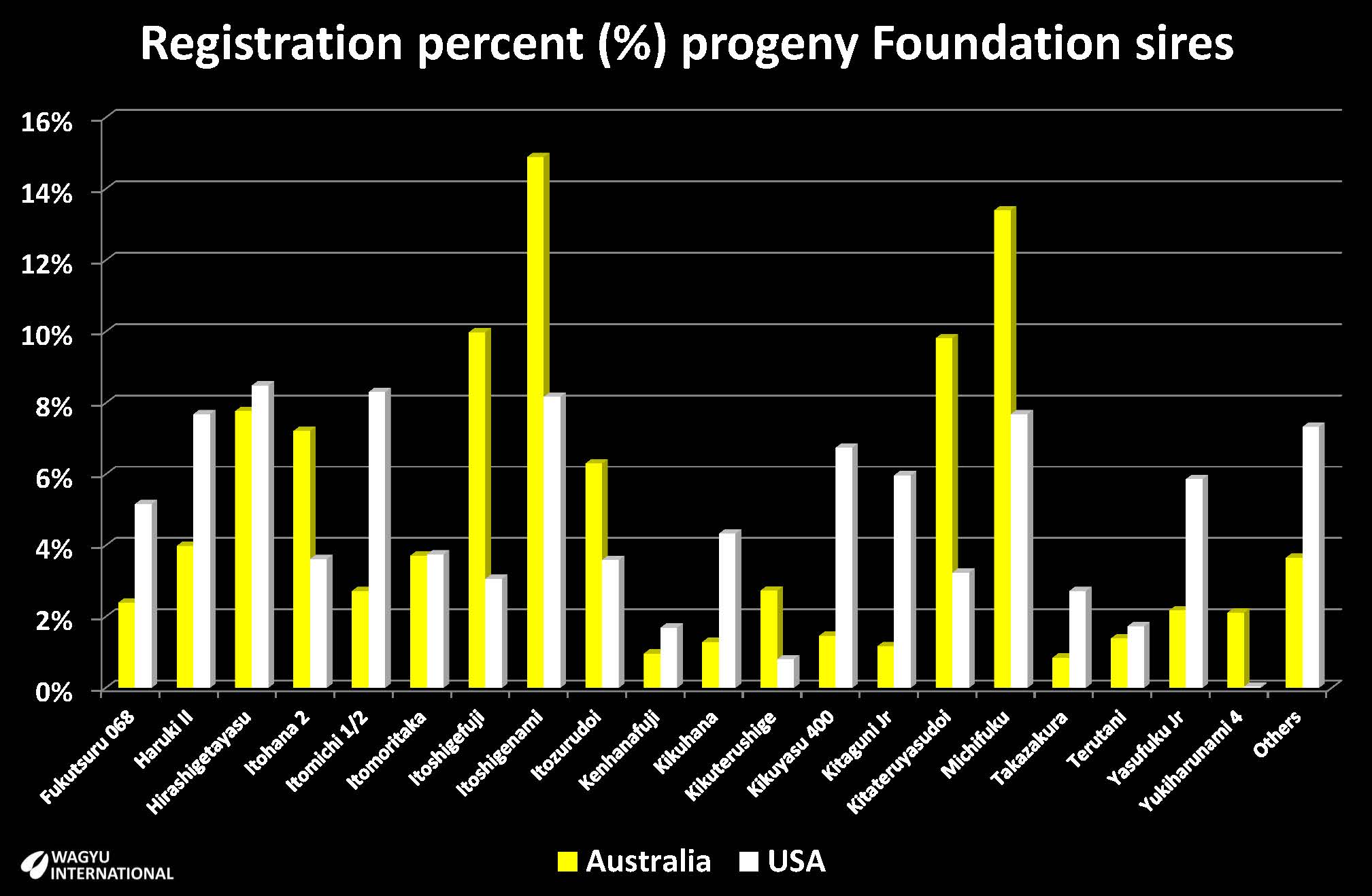 With 5.5 times as many registrations in Australia as in USA, the numbers are expressed as percentages within each country so that the details within the USA herdbook can be viewed.

The following illustration gives a quick comparison of economic production traitts for the leading Founders of the Black Wagyu population: 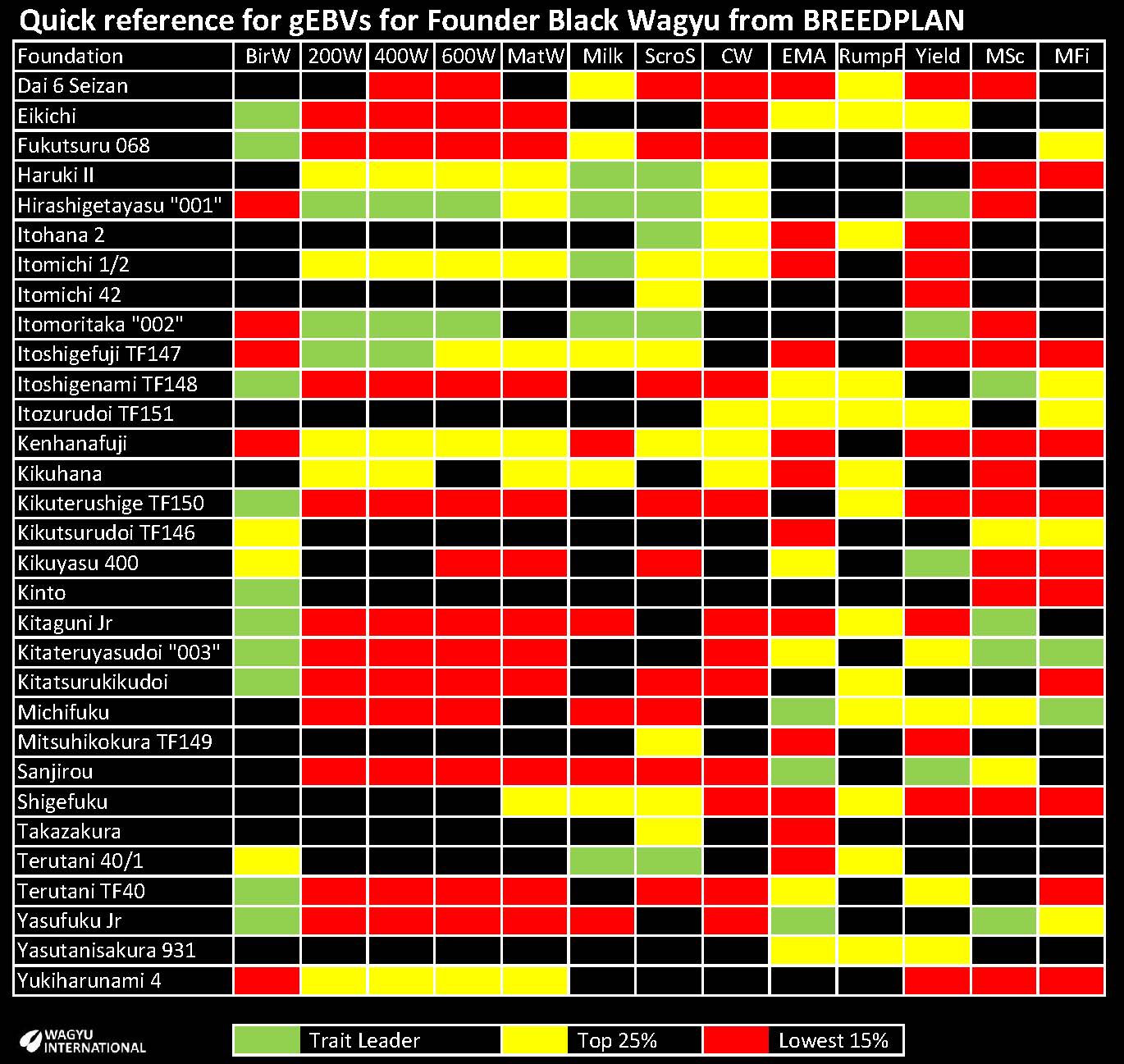 The Trait Leaders are shaded in green and the gEBVs that are within the Top 25% of the Australian BREEDPLAN run of August 2020 are in yellow. Traits that are in the Lowest 15% of the population are shown in red.

The objective in animal breeding is to improve the breeding merit in every generation through the identification of superior young sires/dams. Mayura Itoshigenami Jnr had the highest marbling (IMF%) ebvs when the first Wagyu carcass ebvs were published in 2014: 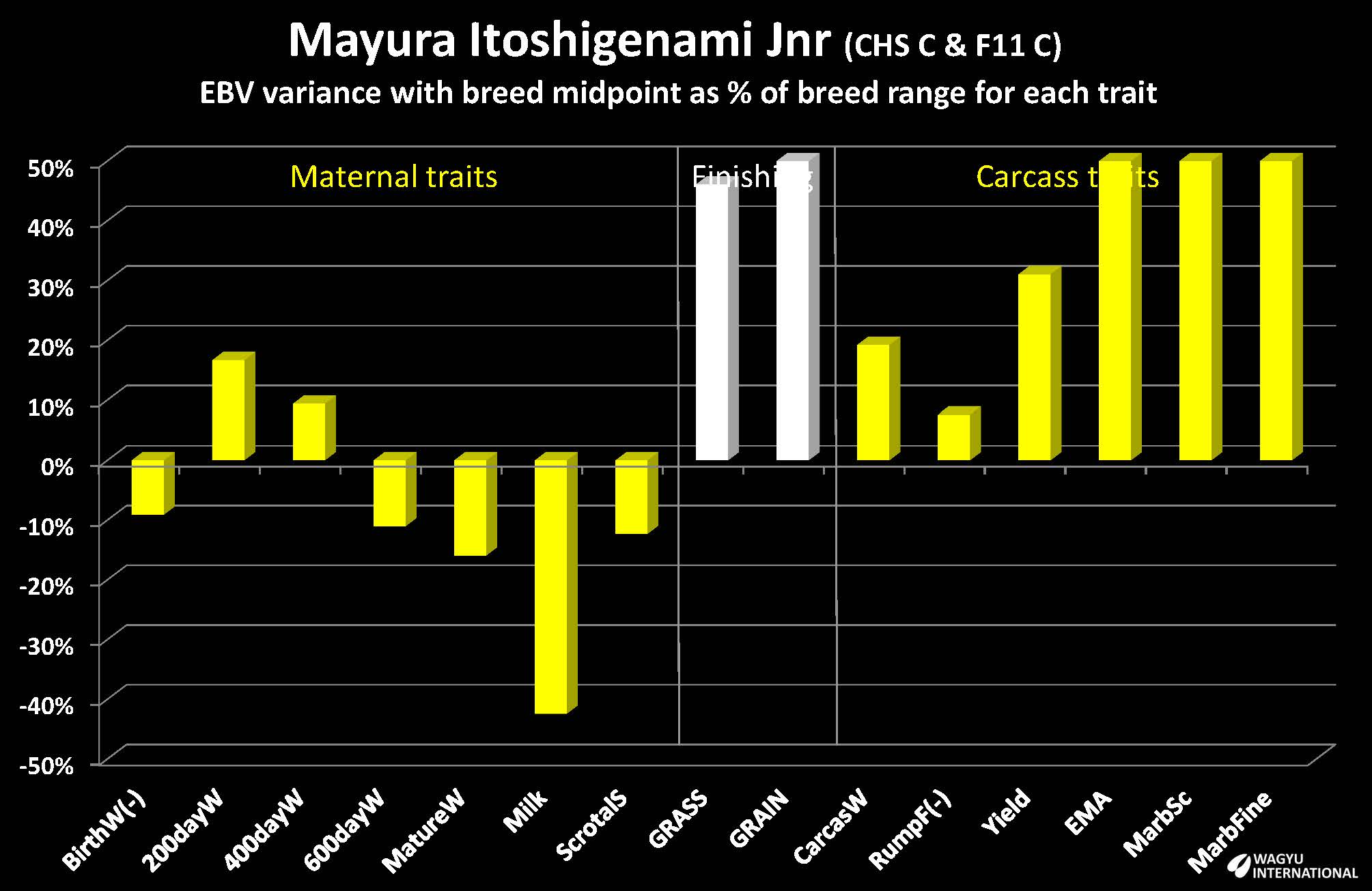 Subsequently EMA and marble fineness have proven exceptional from hundreds of carcass progeny but, apart from milk, the maternal traits have not been much below average so he has offered excellent carcass qualities without taking away too much growth. Only recently the next generation has outperformed his breeding merit.

Simon Coates of Sumo Cattle Company combined carcass with growth traits with Michifuku over Terutani 40/1 breeding and the powerful genomic EBVs and impressive Sumo Michifuku F154 have made his progeny highly sought after. 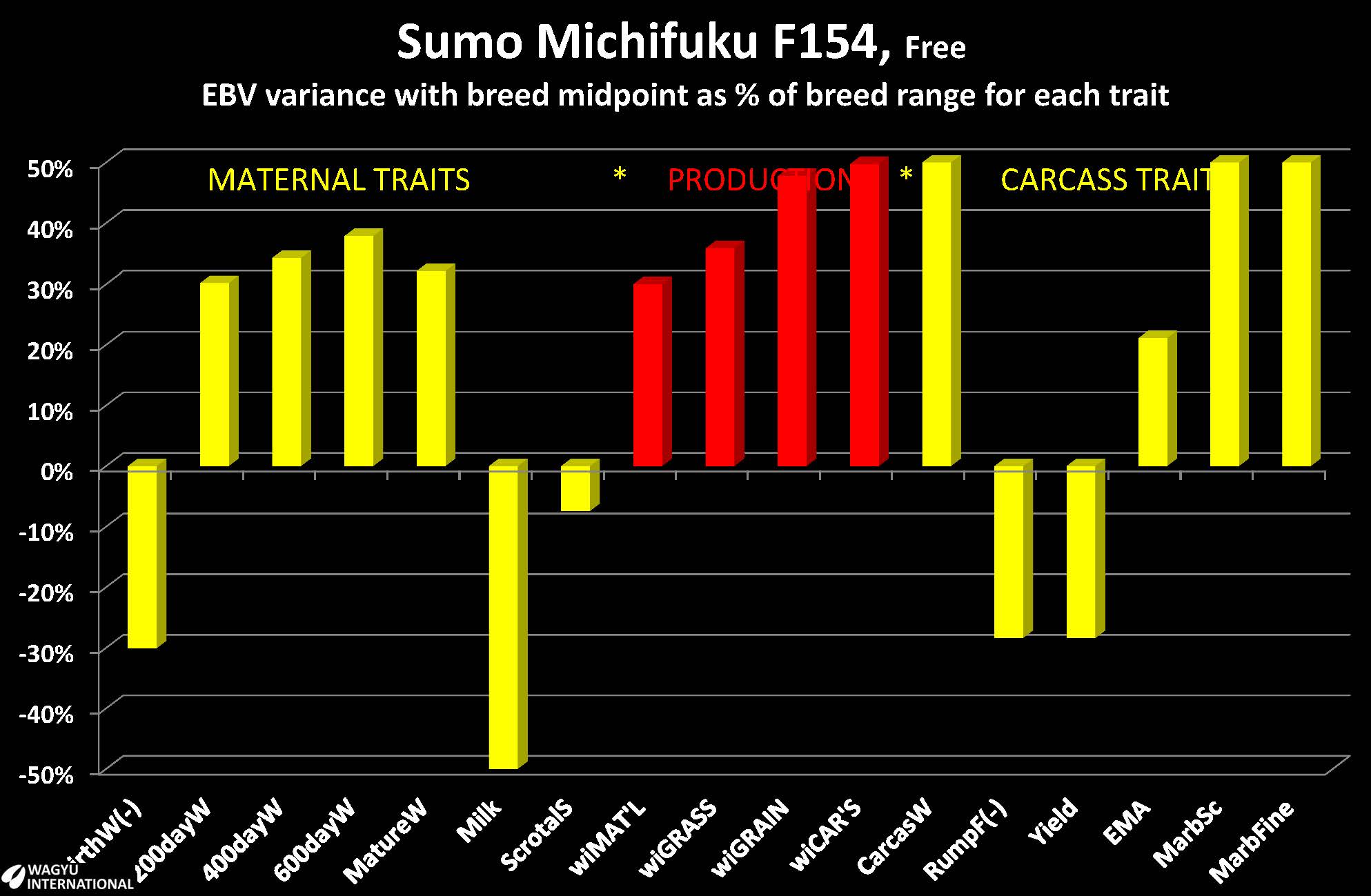 The following year Simon produced another exceptional sire with Itoshigenami TF148 over Terutani 40/1 breeding with this superior balance in a Black Wagyu sire. 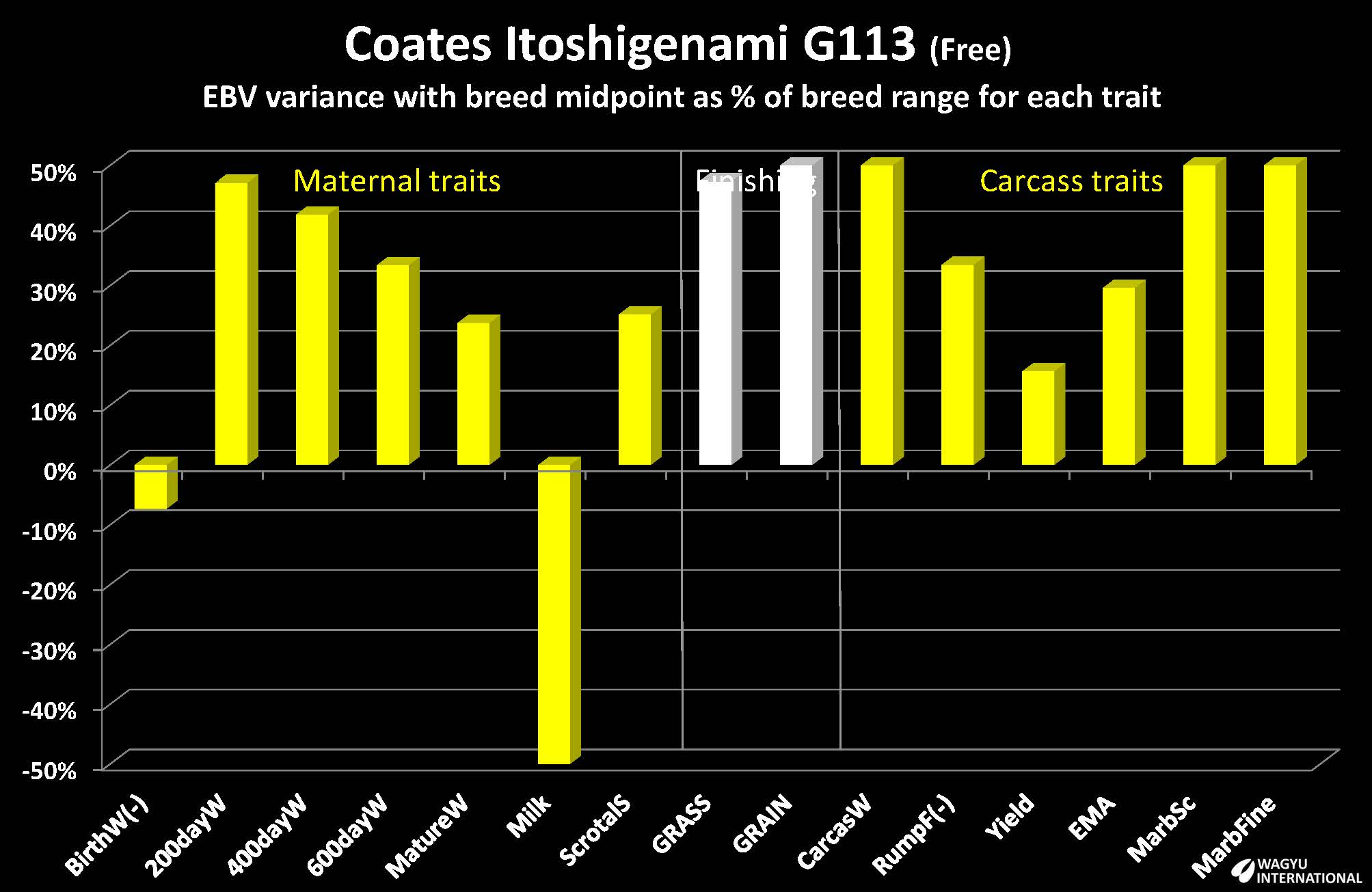